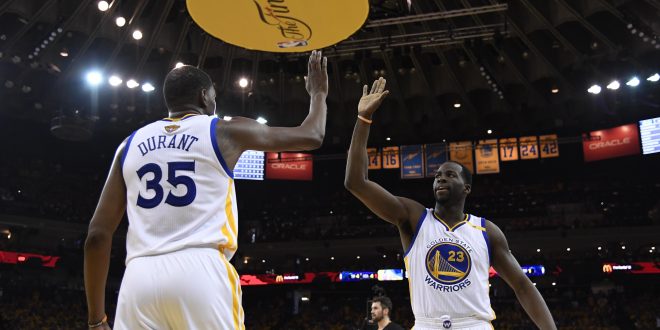 Can The Cavs Come Back In Game 3?

This time last year the Cleveland Cavaliers and Golden State Warriors were in the same position going into Game 3 of the NBA Finals. The Warriors took the first two games at home and lost to the Cavs in Cleveland during the third.

Now the question remains, can the Cavs do it again? Can Cleveland come back from a two-nothing deficit to win it all?

To win game three, the Cavs must first get past Golden States star Forward Kevin Durant.

Durant’s scoring (71 points) and his defense (five blocks) through the first two games has made the Warriors unstoppable. Durant’s play has enabled the Warriors to overcome poor shooting, foul trouble, and turnovers while winning easily.

Despite two blowout games by an average of over 20 points, Durant is not completely satisfied with his team’s performance. During a press conference Tuesday, Durant told media that he understands the pressure to perform on defense but his team has to be better.

Don’t forget about the infamous Stephen Curry who had his first career playoff triple-double with 32 points, 11 assists and 10 rebounds in game two. Not to mention Curry dancing with LeBron.

LeBron James will have to continue to lead his team if the Cavs want to win game three and get back in the championship. In Game 2, LeBron did everything he could to help the Cavaliers steal a game on the road, finishing with 29 points, 14 assists, 11 rebounds and three steals and recording his second triple-double of the postseason.

However, LeBron says the Cavs will have to get Kyrie Irving going if they want a chance at the repeat title. In Game 2, Irving finished with only 19 points and shooting only 8-of-23 certainly didn’t help.

This game brings the Cleveland Cavaliers back home with a tip-off set for 9 p.m. on ABC.