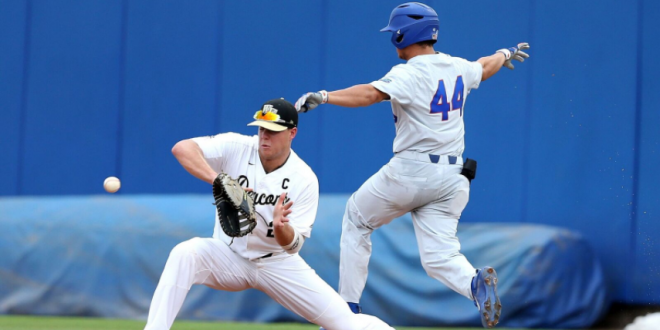 The Florida Gator baseball team was back in action on Monday afternoon after being rained out mid-game on Sunday. The Gators fell by a score of 8-6 in the conclusion of Game 2, which ended in the 11th inning, and will now play in a do-or-die Game 3.

Game 2 resumed with two outs in the bottom of the fifth. Wake Forest held a 5-4 lead over the Gators at the time of the delay. How’d the two sides get to that point? On Sunday, the Demon Deacons took an early 4-0 lead after back-to-back home runs from Gavin Sheets and Ben Breazeale off of Florida starter Jackson Kowar. It was a rough day on the bump for Kowar, he went just 4.2 innings giving up five earned runs on ten hits and three walks.

Florida managed to give Kowar some early run support when Deacon Liput hit a two-run homer to right center in the top of the third, his second of the year. Liput added a RBI single in the fifth to cut the deficit to 4-3. Dalton Guthrie managed to knot the game up at 4-4 in the same frame when he hit a sacrifice fly to center to score Christian Hicks.

Kowar quickly gave the lead right back when Johnny Aiello hit a solo homer to left, putting Wake Forest back on top 5-4. Florida head coach Kevin O’Sullivan then decided Kowar’s day was done after he proceeded to surrender a pair of two-out singles.

That’s when the rain came pouring down causing the finish of the game to be pushed to Monday afternoon.

With Austin Langworthy on the mound for the Gators, play resumed on Monday at 1 p.m. Langworthy immediately surrendered a base hit, but center fielder Ryan Larson threw out a runner trying to score from second to retire the side and keep the deficit at 5-4. Florida kept the momentum going in the top of the sixth when Langworthy hit a sacrifice fly to left to score Nelson Maldonado tying the game at 5-5.

Aiello responded for Wake Forest with his second homer of the game in the seventh, a solo shot off of Kirby McMullen, to retake the lead 6-5.

JJ Schwarz answered right back in the top of the eighth with a solo home run of his own to make the score 6-6. The Schwarz homer marked the third time Florida rallied from a deficit to tie the game.

Unfortunately for Florida, Game 2 was a game ruled by Wake Forest homers. This is nothing new for the Demon Deacons as they lead the NCAA in home runs. All of Wake Forest’s runs came via the long ball. They ended the game in walk-off fashion when Brad Breazeale hit a two-run bomb off of Michael Byrne, his second home run of the game, to seal the 8-6 win over Florida in the bottom of the 11th inning.

The name is deserved… #RAKEFOREST!

The Wake Forest win forces a winner-take-all Game 3. If Florida wins and moves on, the result will be their sixth College World Series appearance in the last eight years.  If they lose their season comes to an end.

I'm an above-average golfer with surprisingly great touch around the greens. Click on my twitter link for some sports talk.
@Ry_McGinn
Previous Warriors Can Clinch NBA Title vs. Cavs with Win in Game 5
Next What Does the UAA’s Record $128 Million Budget Entail?