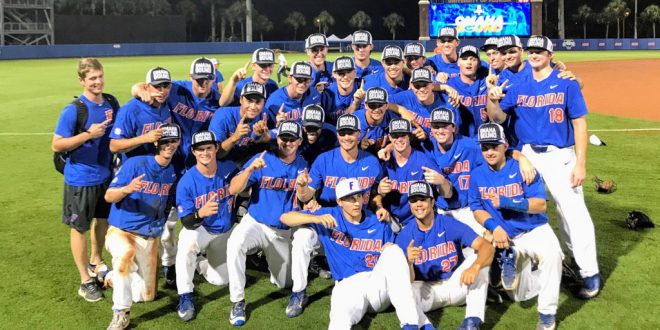 The final day of the 2017 MLB draft brought four more Gators a chance to take their careers to the next level.

The first seven rounds took Alex Faedo, Dalton Guthrie, Mike Rivera and Mark Kolozsvary. It wasn’t until the 27th round that we wouldn’t see another Gator go.

David Lee, the first to be drafted after the break getting scooped up in the 27th round and 808 overall to the Pittsburgh Pirates. Lee graduated from Buchholz high school and attended FIU for his first year of college before transferring to Santa Fe. In the 2016 MLB First-Year Player Draft Lee was chosen the 38th round by the San Francisco Giants. However Lee stayed in Gainesville and although he only played sparingly he did not allow a run in 2.0 innings pitched with three strikeouts.

Two more gators got their chance at the big league in the 29th round, Frank Rubio and Deacon Liput.

Rubio was the 876 pick overall drafted to the San Francisco Giants. In 2017 not only did this student Athlete match his career high with 23 appearances and had a 4.05 ERA in 26.2 innings, he also graduated last month with his Degree in Criminology.

Deacon Liput was the 880th pick overall joining his teammate on the West coast. The sophomore  infielder was picked Los Angeles Dogers after a stellar season. Liput is a .248 career hitter with five home runs and 66 RBIs. He leads the team with 12 stolen bases on the season and had a team-best .417 average in last weekend’s Super Regional win over Wake Forest.

Last But Not Least

The final Gator to go in the 2017 MLB draft was junior Gator catcher JJ Schwartz who will be staying in the Sunshine State. Schwartz was the 1129 overall pick in the 38th round drafted to the Tampa Bay Rays. In his three seasons at UF Schwartz has led the Gators in RBI’s including this season with 53 RBIs. He also led the team this year with 12 home runs.

Omaha, HERE WE COME!!! #CWS #Gators beat Wake Forest 3-0 to clinch our SIXTH trip in the past EIGHT years. pic.twitter.com/SHFHl7Zfu6

Before these guys get started in the big league they must finish out the season with the Gators. Florida earned its birth in the college world series for the third year in a row after defeating Wake Forest in the Gainesville super regional. The Gators will take on TCU in Omaha, Sunday night.