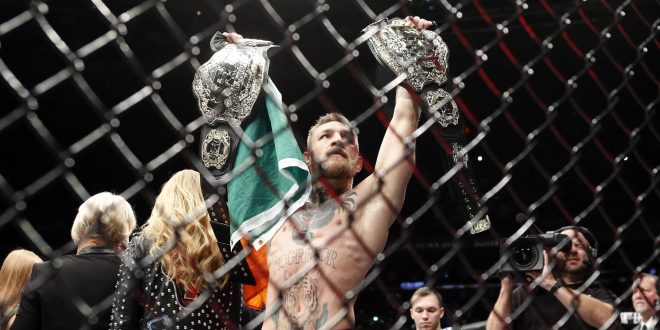 Mayweather and McGregor to Fight in August

After much anticipation, Conor McGregor and Floyd Mayweather will face off on August 26th.

The idea for the match originated in the Summer of 2015 when McGregor said that he would box Mayweather. Since then, there have been many events, including McGregor’s temporary retirement announcement in April 2016, that have set back the fight. Many rumors circulated over the amount of money that would be paid to Mayweather and McGregor, including one that would have made the fight a billion dollar affair. Currently, the fighter’s payment is unknown but UFC president Dana White had suggested that payouts of $100 million to Mayweather and $75 million to McGregor would be plausible.

Floyd “Money” Mayweather is considered by many to be one of the greatest boxers of all time. He is a world champion across five weight divisions, from lightweight to light middleweight. Mayweather has won a total of 15 world championships across his 21-year career.

Mayweather has never been defeated in his boxing career, going 49-0 since he went professional in 1996. Most recently, he squared off against Manny Pacquiao in 2016, which was his most recent victory.

He is also known as one of the most lucrative athletes in the world. Mayweather’s events have earned over $1.3 billion throughout his career.

Conor McGregor is one of the most popular UFC fighters over the past few years. He is one of the most financially successful UFC fighters, placing 24th in Forbes highest paid athletes list with $34 million in earnings. he has a 21-3 record as an MMA fighter and has two UFC championships, in the lightweight and featherweight divisions.

McGregor has been training in boxing specifically for this fight. It will be a change of pace for the Irishman, who is more accustomed to using Brazilian jiu-jitsu, taekwondo and wrestling in his MMA fights.

He has a background in boxing, starting at age 12 and winning youth competitions until he began to focus on martial arts when he was 16. He will need to draw from this experience as he prepares to fight traditionally against Mayweather.

The fight is set for August 26th.