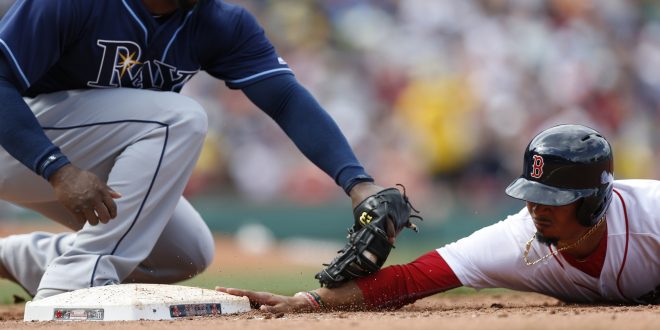 A three-game series between the Boston Red Sox (49-36) and the Tampa Bay Rays (44-42) begins tonight. The red-hot Boston squad will pose a challenge as the Rays continue to work for the second wild card spot in the American League. This season, the Rays have won three of seven games against the Red Sox, all in Fenway Park. The Rays will be looking to stay above .500, and playing at home may be all the motivation they need to do so.

Yesterday night, the Tampa Bay Rays played the last game of a two-game series against the Chicago Cubs. The series, played in Chicago, ended in a split as the Rays lost yesterday 7-3. The Rays started out the game strong, and held a three-run lead with four innings remaining. The Rays bullpen then allowed seven runs, while the Cubs bullpen shut down the Rays for the remainder of the game.

Cubs head coach Joe Madden expanded on how they beat the Rays. One thing he mentioned was the fact that they were able to get the Rays starting pitcher out in five innings with around 100 pitches. Looking at the Rays’ 2017 season, one of their main problems has been an inconsistent bullpen. In order to stop a swinging at will Red Sox team, it will be essential for the Rays bullpen to step up.

The Red Sox are also coming into tonight’s game following a loss. On Wednesday, the Rangers avoided the series sweep with a 8-2 win, and brought the Red Sox’s six-game win streak to an end. This was the Red Sox’s first loss to the Rangers this season. Following a streak of games that included at least 10 hits and six runs in each game, the Red Sox only recorded two runs off three hits in the loss. Regardless of a one-game slip up against the Rangers, the Red Sox are sure to be fired up tonight to get the bats going again. They had won eight of their last nine games before the loss last night against the Rangers.

What to look forward to tonight

Starting tonight for the Rays will be one of their more successful pitchers this season, rookie Jacob Faria. He has started only three games this season, but has won them all. The winning mentality young Faria will be bringing to the game tonight will be a sure confidence booster for the Rays. In his first majors season, Faria has an ERA of 2.23, with 35 strikeouts to only five walks.

Another boost for the Rays is the filling in of center fielder Mallex Smith for disabled Kevin Kiermaier. Smith had four hits yesterday night against the Chicago Cubs, scoring all three of Tampa’s runs. Keep an eye out for Smith in the batters box tonight as a fight for that starting position may be amongst the cards.

For the Red Sox, All-Star Chris Sale is set to take the mound. Sale leads the major league with 166 strikeouts and is 11-3 with a 2.63 ERA in his seventh season. He has already beaten the Rays twice this season, so it’s no new task for the left-handed veteran. He has a combined 24 strikeouts against the Rays alone in those two wins. His career record against the Rays is much more human though with 6 wins and 4 losses in 12 games, recording a 3.52 ERA.

Only a pair of Hall of Famers had more such games at the same point pic.twitter.com/xQbCExKxFy

A small set back for the Red Sox as Dustin Pedroia was taken off yesterday’s game against the Rangers. After the game head coach John Farrell shed some light on the situation. The Red Sox will be monitoring Pedroia, but he is likely to return during the three-game series against Tampa. 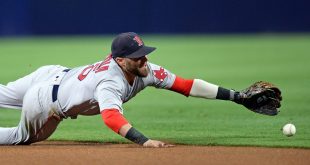