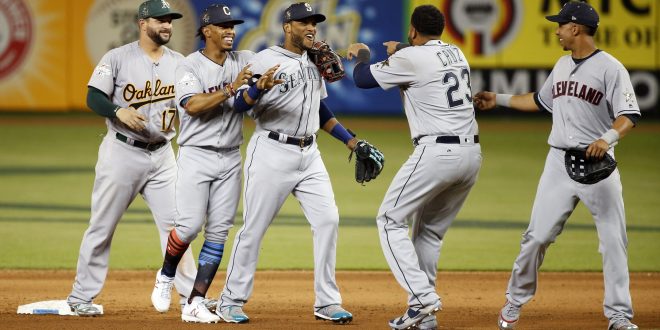 Another year, another MLB All-Star Game. The 88th-annual game will always belong to the American League stars as Robinson Cano’s homer lifts the AL to a 2-1 win over the NL.

The 88th edition of the All-Star Weekend would take over the city of Miami with three straight days of events. The final event of the weekend festivities would have the eyes of the city and the world on Marlins Park.  Chris Sale got the start on the mound for the American League and Max Scherzer started for the National League.   The game remained scoreless until the American League pushed across a run in the fifth on a bloop RBI single by Minnesota Twins infielder Miguel Sano.

The National League’s one score of this game would come from the St. Louis Cardinals catcher Yadier Molina who homered in the bottom of the sixth. The game remained tied until the National League would have its opportunity to take the lead.  Cleveland Indians‘ pitcher and Gainesville native Andrew Miller would have other plans. 2016 NL Rookie of the Year and Los Angeles Dodgers shortstop Corey Seager would hit a pitch from Miller to right field and it looked like it would fall for a hit but Detroit Tigers outfielder Justin Upton would dive for the catch to keep the game tied.

In the 10th inning, Seattle veteran Robinson Cano hit a home run to give the AL the lead and Miller shut down the NL in the bottom of the inning to preserve the win.

The AL has now won five All Star Games in a row; in fact, the National League has won only three games against their rivals since 1997.  The win also deadlock’s the series at 43-43-2 all-time.

Washington D.C.’s Nationals Park will be the site of  next year’s All Star Game.

After a @Chevrolet #ASG MVP performance, there’s only one thing to do: Pick out the vehicle that you’ll ride into the sunset. #ChevyBaseball pic.twitter.com/UWYglqW4LR

Cano would not only relish in the victory of winning the game for his team but would also take in the celebration of being awarded MVP honors during the post-game festivities at Marlins Park.  And getting a new car isn’t bad either.

Cano would credit the game-winning run to just wanting to swing hard enough and hoping for the best to work out. Cano will always be remembered in this year’s game as being the hero and game winner for the American League.  It was the first extra inning homer hit in the All Star Game in 50 years; the last one was hit by Hall of Famer Tony Perez.

When Does MLB Action Return?

Now that the All-Star Game festivities have come and gone, we look ahead to upcoming MLB action. The schedule will resume this Friday as the Miami Marlins will host the Los Angeles Dodgers and the Tampa Bay Rays will travel to play the Los Angeles Angels.