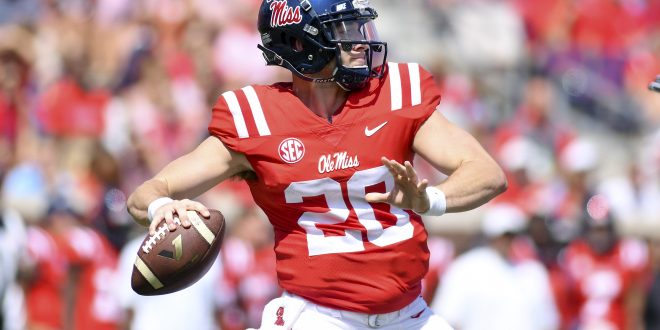 The University of Mississippi Rebels will be on the road for their first time this season, taking on the California Golden Bears Saturday.  Both the Rebels and the Golden Bears are 2-0 for the season, but not for long. This weekend will force one team to break their two-game win streak.

Ole Miss will make their trip to Berkeley for their first game against a Pac-12 school in football. This game will be the westernmost game in Ole Miss history.

Here’s what each time is bringing to the California Memorial Stadium this weekend.

The Rebels are currently 2-0 after beating both South Alabama and UT Martin in Oxford. The Rebels have yet to play a SEC West conference game.  Interim Head Coach Matt Luke says quarterback Shea Patterson is the biggest difference in the team this year.

Patterson started the last three games of the 2016 season, after taking over for Chad Kelly. Patterson is only the Rebels’ sixth true freshman to start at quarterback. In the game last weekend against UT Martin, Patterson threw five touchdown passes and 489 yards.

Coach Luke says California’s James Looney is someone to look out for on Saturday.

In July James Looney was named to the Bronko Nagurski Trophy watch list. According to CaliforniaGoldenBlogs.com, the award was created in 1993 by the Football Writers Association of America, the Bronko Nagurski Trophy is awarded to the best defensive player in college football and is presented by the Charlotte Touchdown Club. The award was established to complement the Heisman Trophy Award, which at the time had never been presented to a defensive player.

In the past two games, Looney has had a combined total of nine tackles, and has been able to help California’s defensive team from allowing North Carolina and Weber State from scoring enough points for a “W.”

Kate Venezio is a fourth-year telecommunication-news student at the University of Florida. Kate does it all: Behind the camera she captures emotional moments as a photographer for the University of Florida Athletic Association. She's comfortable being in front of the camera, too. Kate interviews players, coaches, fans and family members for pre- and post-game coverage as a beat reporter for ESPN Gainesville/WRUF-FM. In addition, Kate produces the sports segment for the weekly WUFT News program. There, she's responsible for writing the script in its entirety to include production commands. The presentation includes video highlights and interviews taped and edited, and Kate then live anchors the final package on a daily deadline. In addition, she writes stories for wruf.com where she informs sports fans of local, state, and national trending topics. Kate also utilizes social media as a tool to help get the stories in front of viewers.
@@kate_venezio
Previous College Football Preview: Alabama vs Colorado State
Next Gators Volleyball Back in Action after Hurricane Irma