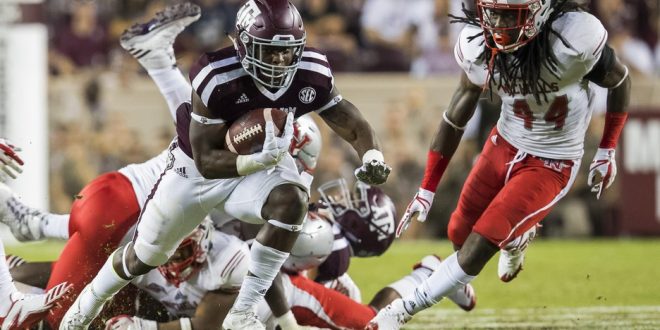 SEC and SBC will go head-to-head this weekend. After starting off this season strong, the Texas A&M Aggies are looking for another win against the UL Lafayette Ragin’ Cajuns on Saturday. This season, both Texas A&M and UL Lafayette are 1-1 and looking at this game as a chance improve early. Last Saturday, Texas A&M beat Nicholls 24-14 and UL Lafayette lost 66-42 at Tulsa. Back in 2006, Texas A&M won 51-7 and Lafayette will look to improve on their past performance.

However, when it comes to preparing for a game, each player has their own routine. The timing of games varies and each season features a different schedule, but Coach Sumlin believes that Saturday’s 11 AM kickoff has its advantages.

When it comes to success, execution is just as important as morale for the team’s performance. According to Sumlin, supporting a cause by wearing unique things on gameday isn’t just for the fans, but to create support for the team during the game.

This game is going to be a test of skill versus adaption. Coach Sumlin believes that UL Lafayette’s success is due to the team’s skill and plan of action. However, Sumlin thinks the game’s outcome, and the rest of this season, will benefit from Coach John Chavis or, “Chief”, and his help on A&M’s sideline.

It’s been 11 years since these two teams played and we’ll have to wait and see if history will be repeated.

The rematch will be on Saturday in College Station. Kick off is set for 11 AM CT, 12 PM EST.