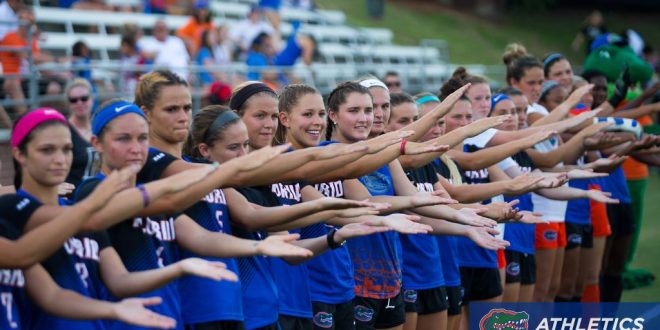 SEC Soccer is Back in Gainesville

After its last two games against Florida State and USF were canceled due to Hurricane Irma, the Florida Gator soccer team is back in Gainesville to take on the Ole Miss Rebels.

Tonight’s matchup will be the first SEC game of the season for both teams. Both Florida and Ole Miss started their season on a solid note: the Gators have a 5-1-0 record while the Rebels have a 7-0-1 record. The two teams currently rank seventh and third in SEC standings, respectively.

Before this past catastrophic weekend in the state of Florida, the Gators earned split results during their trip to the west coast. In the Husky/Nike Invitational, Florida lost 1-0 to the Washington Huskies before earning a 1-0 victory over the Portland Pilots.

This season, Ole Miss is currently one of the ten unbeaten teams around the nation. The Gators will be the first opponent the Rebels have faced this season that are ranked in the top-10 teams of the United Soccer Coaches National Rankings. Florida is one of four SEC teams that are featured in that ranking. Ole Miss will be the second ranked team that the Gators face this season. Florida previously faced Stanford on August 25th, beating the top-ranked Cardinals 3-2 in a thrilling victory from Gainesville.

Getting Back to SEC Action

Tonight, the Gators will try to emulate last season’s performance against Ole Miss. It was a 3-0 victory, in which former Gators Savannah Jordan and Pamela Begić combined for all three goals. Florida will face a tough task against the Rebels both defensively and offensively. In eight games this season, the Rebels have scored 38 goals while giving up just one. Ole Miss has also totaled three 8-0 victories against unranked teams. In comparison, the Gators have struggled to put the ball into the net this season; they have scored just 12 goals in their six games played.

After Jordan ended up her collegiate career last season, the Gators have had to find a go-to player on offense. Midfielder Gabby Seiler may be the answer, leading the team with five goals.