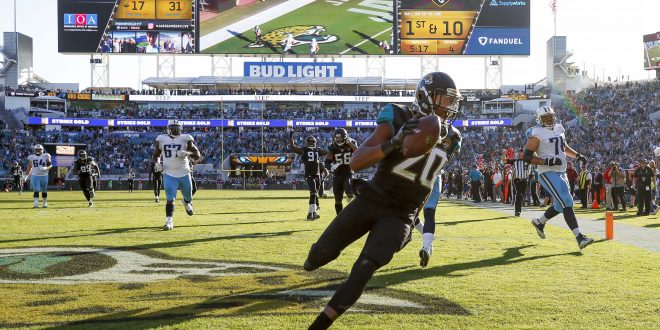 The Tennessee Titans come to Jacksonville to take on the Jaguars on Sunday at 1:00 PM. There was speculation earlier in the week that the game would be moved to Nashville due to the effects of Hurricane Irma. Those rumors seem to have subsided as the game will continue on as scheduled at EverBank Field.

Titans Looks to Bounce Back

The Titans had a rough start to the season as they opened the regular season against Oakland and lost 26-16. Quarterback Marcus Mariota did not look his best as he threw for a little over 60% of his passes and no touchdowns against a Raider defense. The Raiders’ defense was thought to be one of the weaker defenses in the league. He will have to improve as he plays a defense that looked unstoppable last week.

Another issue the Titans had last week was establishing any form of running game, which is a big part of their scheme. The Titans were third in the league in rushing yards in 2016 and this helped the offense thrive from play action as opposing defenses stacked the box. Without a running game, defenses will be more focused on dropping into coverage leading to more stalled drives and turnovers.

On the other side of the ball, stopping the run seemed to be an issue. The Raiders ran for 109 yards with Marshawn Lynch gaining 76 of those yards. The Titans front seven struggled to bring down the power running Lynch and they will face a similar runner in Leonard Fournette this week.

There were also some good things that came out of the game for the Titans as well. The Titans improved their pass rush as they got to Carr early against a very good offensive line.  At one point, sacking Carr on back to back plays with aggressive blitzes from the second level. Hopefully, this will continue as they face a younger, less proven Jags line.

Doug Marrone’s first game as the Jaguars Head Coach seemingly could not have gone any better. The former offensive line coach improved the team on both sides of the ball as the offense ran methodically over the Texans, and the defense caused turnovers.

Marrone was happy with how both the offense and the defense played.

Rookie running back Leonard Fournette rushed for 100 yards on 26 carries in week one while also running for his first touchdown as a professional. Fournette, in a recent interview, talked about how his O-Line dominated a good Texan defense.

The defense also looked stellar as the Jaguars had 10 sacks on a depleted Texans offensive line. Newest member Calais Campbell had four of those sacks, with 3.5 coming in the first half.

Vote for @Campbell93 as the @CastrolUSA Clutch Performer of the Week by tweeting #ClutchPerformer Campbell. https://t.co/rRio5Ns3bZ

"The front seven is unbelievable. For our guys to talk and execute the way they did was awesome."#WinToday https://t.co/nve3G9kB4T

The win came at a cost as Blake Bortles lost his favorite target, Allen Robinson. In 2016, Robinson caught 73 passes for 883 yards and 6 touchdowns. The offense will surely miss him.

Bortles talked a little about this and how other receivers will need to step up to fill his shoes.

The Jaguars looked to keep the ball out of the air in the first game. Blake Bortles had 16 interceptions a year ago, and Marrone has been adamant about diminishing momentum-shifting turnovers. Bortles only threw 21 times last week and had no interceptions, and this was a major reason why the Jaguars looked as good as they did. Bortles focused on being more cautious and not losing the game for his team. This strategy should carry over into week two against the Titans.

@dyrudolph
Previous Cincinnati Bengals Fall to the Houston Texans
Next Preview: Gators Renew Rivalry with Tennessee with Vengeance on Mind