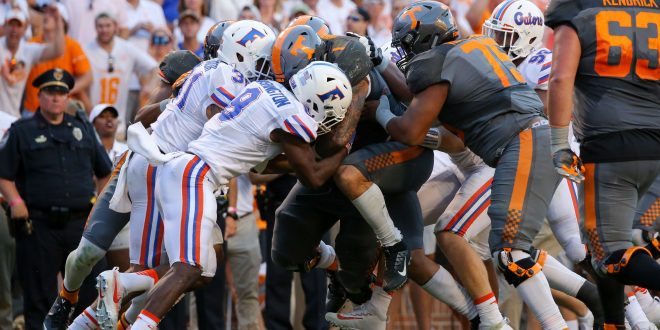 Preview: Gators Renew Rivalry with Tennessee with Vengeance on Mind

The last time these two teams met, Tennessee ended the Gators’ 11-year win streak. Florida will be instead be hoping for a result similar to the one the last time they played in Gainesville. That game was marked by the now famous 4th and 14, 63-yard touchdown pass from Will Grier to Antonio Callaway. That play capped a ferocious comeback, and was the first big win of the Jim McElwain era.

Producing without Callaway or Scarlett

This time around though, the Gators won’t have Callaway. Callaway and running back Jordan Scarlett are among nine players whose indefinite suspensions will see them miss this battle against the Vols.

That means more pressure will fall on the shoulders of redshirt-freshman quarterback Feleipe Franks. Head Coach Jim McElwain confirmed the young gunslinger will be making his first-ever start in the Swamp, and only the second start of his career on Saturday. Franks showed some flashes against Michigan, but inexperience and an unsteady offensive line performance led to his line of 5-for-9 for just 75 yards.

For a better result this time around, he’ll need help from the line and the running game. While Tyrie Cleveland was the only offensive playmaker that stood out for Florida, the offensive line lost the line of scrimmage battle in Dallas. They were unable to contain the threats that were Maurice Hurst and Rashan Gary. The Gators managed just 11 net rushing yards in Jordan Scarlett’s wake and gave up five sacks.

To that extent, the biggest shakeup on the offensive side of the ball isn’t players returning from suspension, but offensive coordinator Doug Nussmeier moving to the press box instead. Nussmeier received plenty of heat after the Michigan game, and this move may be an attempt at getting improved play-calling to help out a talented, but young offense.

That may include taking some shots down the field. They had some success with that last game with Cleveland. In addition, last year versus the Vols, the Gators hit them for gains of 51, 43, 36, and 22 yards through the air. Either way, it’ll take something creative, as Tennessee comes in with the 12th ranked pass defense in the country through the first two weeks of the season.

And it will most likely include a heavy dose of the run game. Not only will it help set up some play-action shots, but the Vols struggle to stop the ground game. They allowed 535 rush yards against Georgia Tech, a school record. Lamical Perine and Mark Thompson figure to get plenty of touches to attempt to wear down the Tennessee defensive line.

Defensively, the Gators look to avoid the second half lapses that cost them against Michigan and in last year’s Tennessee game. They gave up 20 second-half points to the Wolverines, and gave up 21 in the fourth quarter last year in Knoxville.

Florida does have promising signs though. They were able to apply pressure on Wilton Speight last week, getting to him to the tune of six sacks. The secondary did give up big plays, with McElwain challenging them to win their one-on-one matchups this week.

However, they did notch two pick-sixes, one via senior and leader Duke Dawson, the other from freshman CJ Henderson. Apart from the big plays, the secondary held their own, holding Speight to just 181 pass yards. They’ll be facing a much less experienced passer against Tennessee. Whether its Quinten Dormady or even Jarrett Guarantano, neither have played in a hostile environment like The Swamp, which could play into the hands of a hungry defense in front of its home fans for the first time this season. On the injury front, the only starter from last week that will be missing is Kylan Johnson, who’s out with a hamstring injury.

“A wise little bird told me that this is that game that Tennessee has circled. They know that for them to get to where they want to go they have to come to The Swamp and take it from the Gators.”

Jim McElwain said that in his weekly appearance on Gator Talk on Thursday, and hits the nail on the head.

The Vols got that much-desired win over Florida last year, but ceded the East after faltering down the stretch.

Now Butch Jones’ team has the chance to firmly put themselves in driver’s seat again with a win in Gainesville. They’d move to 3-0 while they’re arch rivals would fall to an underwhelming 0-2 start.

To pull off their first win in Gainesville since 2003, they’ll rely on a few playmakers that have already played well this season.

Offensively, junior quarterback Quinten Dormady has been serviceable. One of his favorite targets so far, Marquez Callaway, has been more than that.

Callaway already has three touchdown receptions on the season. In addition, he’s averaging a whopping 30.4 yards per reception, fifth best in the nation. Callaway provides that big play ability to Dormady, and against a team that gave up some big plays against Michigan, the Vols and offensive coordinator Larry Scott may look to exploit that area.

At running back, Tennessee has x-factor John Kelly. Tennessee lost Alvin Kamara to the draft, but Kelly has kept the position in good hands. The junior had a coming out party against Georgia Tech, rushing for four touchdowns. He’s also averaging 151.5 yards from scrimmage, and is the only SEC player to lead his team in rushing (208 yards) and receptions (10).

Defensively is where the team has had its aforementioned struggles. The unit has given up an average of 435 yards per game so far, third-worst in the SEC. And while the Florida offense has its struggles, Tennessee ranks last in the SEC in sacks (.5 through two games), which may help Franks get into rhythm in just his second start.

Kickoff is 3:30 p.m. at Ben Hill Griffin Stadium. The game will be broadcast on CBS with Brad Nessler and Gary Danielson on the call.