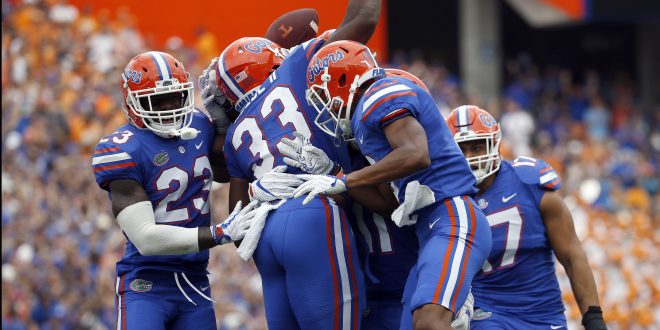 Gator Defense Locked In on Kentucky

The Florida Gator defense is already turning the page after their dramatic win over Tennessee this past weekend. All focus has turned from Rocky Top to another SEC East foe, Kentucky.

“We came off a big win, but we’re focusing on staying locked in, not getting too high,” said Jeremiah Moon, redshirt freshman linebacker.

And the defense can’t, because the Wildcats pose a real danger, coming into the meeting at 3-0. Kentucky is coming off a huge 23-13 win at South Carolina.

The Gator defense will have to face the two main threats that led the Wildcats to that victory. Quarterback Stephen Johnson has thrown for over 560 yards on the season and is the team’s second leading rusher. Benny Snell, Jr., meanwhile leads the team with 272 rush yards and three rush touchdowns.

Since Kentucky can run the ball, it’ll be crucial for Florida to tackle well. That’s something they struggled with against John Kelly and Tennessee, giving up 141 rush yards to the Volunteer running back.

“We had great pursuit to the ball… it was more of when you’re coming up on a guy, we need to square him up and wrap up and make sure we get him to the ground,” senior safety Nick Washington said.

Thus, that’s something that’s been hammered home to the team this week in practice.

The Florida defense isn’t just dwelling on the negatives though.

Young playmakers like Marco Wilson and C.J. Henderson have stepped up in big roles in the secondary as freshmen.

“Everyone that came in, they’ve all made lots of plays during camp,” Washington said. “C.J., he’s kind of a quiet guy, but his game speaks for itself.”

In the front seven, guys like Jachai Polite have stood out, especially for his hustle, like on this specific play against Tennessee.

When asked if coaches had shown the team the play as an example of good hustle?

“Oh definitely, we saw it this morning–and this afternoon–and yesterday,” Moon said.

It’ll be hustle like that from the entire defense that’ll help Florida if they plan to extend their win streak over Kentucky to 31 years.

“They [Kentucky] always have a chip on their shoulder,” Washington said, “and the streak, they know how long the streak is since they’ve beaten us, so they come out every year trying to break that streak.”

The Florida Men’s Basketball team is hitting the road to play the Kentucky Wildcats. Gators …