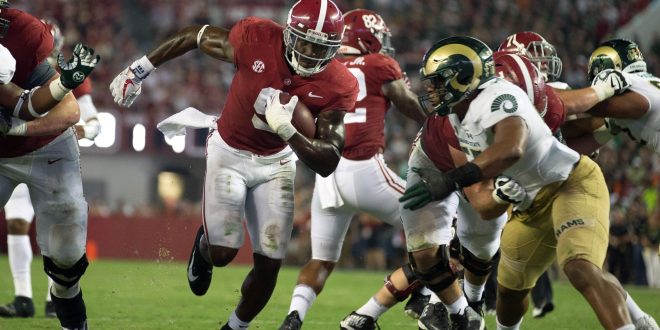 For the first time since 2011, the Alabama Crimson Tide and Vanderbilt Commodores will face each other, and the ‘Dores might want to forget their previous meeting with the Tide. Alabama defeated Vanderbilt 34-0 in Tuscaloosa nearly six years ago, and the Tide held them to 190 total yards in the shutout. Saturday, the Commodores are hoping to their home crowd advantage helps hold the Crimson Tide in check.

Going into this Saturday’s game, both undefeated teams have victories over ranked opponents. In the first matchup of the Chick-Fil-A Kickoff game, the No. 1 Crimson Tide took down the No. 3 Florida State Seminoles 24-7 and went on to beat unranked opponents in Fresno State and Colorado State at home. Vanderbilt started with wins against Middle Tennessee and Alabama A&M, before upsetting No. 18 Kansas State at home. With both sides sporting a 3-0 record, let’s see who stays hot in their SEC opener.

Vanderbilt Preparing for the Best

After earning a quality win against a ranked opponent, Vanderbilt is confident heading into the SEC on CBS’ Game of the Week. However, now they’ll face a more difficult challenge against the top team in the country. Vanderbilt head coach Derek Mason said his team will establish the run and continue to work on their weaknesses. After three games, the Commodores have the 111th ranked rushing offense averaging 103.3 yards per game and 3.04 yards per rush. Vanderbilt will likely continue to rely on senior running back Ralph Webb, a Gainesville native, who leads the team in rushing yards and yards from scrimmage.

And though Alabama is considered one of the best on both sides of the ball, Vanderbilt has something of their own to boast, as the Commodores currently lead the country in total defense and have the best scoring defense. Mason believes his unit has the ability to rush the passer and do it consistently, and they’ll have to against quarterback Jalen Hurts, who can hurt teams with his legs. Alabama’s front seven will also have its work cut out for it against junior quarterback Kyle Shurmur, who has eight touchdowns and been sacked twice this season.

With a high-profile opponent like the Alabama coming to town, the Commodores will host some high-profile visitors of their own. They’ll have several five-star prospects on campus for this game.

The focus for this game may be on each team’s defense, but both squads also have talented backs and receivers. For Vanderbilt, receivers Jared Pinkney and C.J. Duncan are leaders on offense, and over the first three games of the season, the wideouts have a combined three touchdowns. Duncan and Pinkney are averaging over 20 yards per reception between the two. Mason talked about Duncan’s importance and value for the offense, saying he’s the “glue of that receiving corps.”

Sophomore wide receiver Kalija Lipscomb, who has three touchdowns and is averaging 17.7 receiving yards per game, is also someone to watch out for in Vanderbilt’s offense.

On the other side, Alabama boasts a pair of solid running backs in Bo Scarbrough and Damien Harris, both of which lead the team in rushing behind Hurts. Through three games, Alabama’s rushing offense ranks 24th in the country. Individually, Scarbrough has one rushing touchdown and averages 4.3 yards per carry. Meanwhile, Harris has three touchdowns and averages 6.1 yards per carry. Neither has compiled eye-popping numbers yet, though the season is still young.

Saban said he thinks Damien Harris and Bo Scarbrough "probably played their best in this last game" vs. Colorado State.

Nick Saban is one of the most successful coaches in college football, but he acknowledges that Alabama is facing a great defense. Saban said the Commodores deserve to be a Top 25 team because of the way they’re playing.

The Crimson Tide will look to extend their winning streak against the Commodores to 11 games with a win. Kickoff in Nashville is set for 3:30 p.m. ET on CBS.