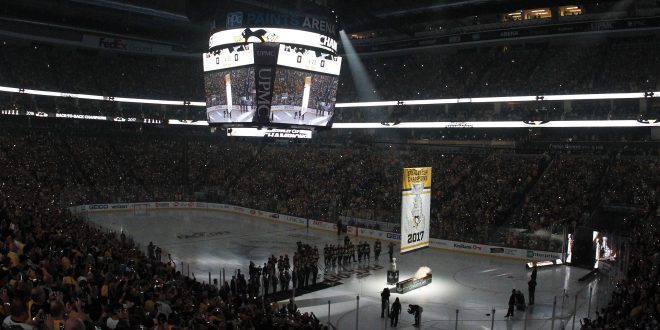 A quartet of games on Wednesday night marked the beginning of the National Hockey League’s regular season. A new quest for the Stanley Cup has begun.

The wait is over. The pursuit continues. The excitement returns.

The Back-to-Back Champs are Back

The Pittsburgh Penguins hung their second Stanley Cup championship banner in as many years before taking on the St. Louis Blues. Blues defenseman Alex Pietrangelo ended up being the star of the night with two goals, including the game winner in overtime.

Other NHL Games in Action

Battle for The Sunshine State

The rest of the NHL gets going on Thursday and Friday with a full slate of games, including the Florida Panthers traveling to Tampa Bay to take on the Lightning.

A player to watch for the Lightning is goaltender Andrei Vasilevskiy. This will be his second year as the starting backstop, but his first full season in that role. A successful start against the Panthers will help solidify him as “the guy” in Tampa Bay.

Both teams split the season series with neither team being able to snag a win on the road.

Panthers captain Derek MacKenzie will be seeking additional leadership from other sources with the departure of veteran wing Jaromír Jágr.

Other Notable Thursday and Friday Games