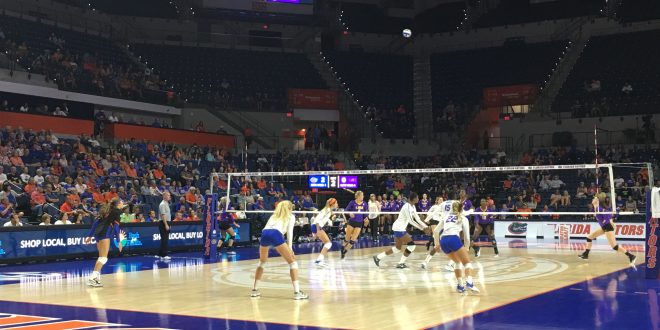 Today most volleyball fans will wake up and read the box score of the Gators vs. Texas A&M Aggies. They will see that the Gators won in four sets and believe the game was in hand early as usual. But this was not the case. Florida survived yet another tough SEC opponent that had nothing to lose against the #1 ranked team in the nation.

The Gators survived massive runs from the Aggie offense right from the start including a 7-0 run in the first set.

It was not an offensive superstar that made the play, but a front row assists specialist. Cheyenne Huskey, with 25 total kills on the year, ended the colossal run with a beautiful fake-spike kill, shifted the momentum, and helped pull off a 25-23 nail-biter of a first set. This set the stage for what the rest of the match would look like.

As most know, the Gator volleyball team under coach Mary Wise has been outstanding all year. They are the only undefeated team left in the nation and Wise continues to break records with her career win total. It is not ridiculous to wonder if this team really is perfect.

Fans who came to O’Connell Center expecting perfection in this SEC match-up against the Aggies may have left disappointed. Constant issues with attack and service errors dug the Gators into a steep hole against A&M. The team was not perfect, but they won anyway.

The Gators knew that they would get the best A&M team because of their ranking. Carli Snyder, who was crucial in the win, spoke on this. She talks about playing “Florida Volleyball.” To play clean and to dominate. Snyder said that once they got their errors corrected, the rest was easy.

The Gators would close out the game in the fourth set with outstanding runs including a monstrous 8-0 run. Snyder talked about the adjustments made for this quick shift in momentum for the final set.

Coach Wise won her 887th career game tonight which put her first in Division 1 volleyball wins among female head coaches. Wise achieved this goal by not only recruiting the best players, but by coaching the best to be even better.

While also being able to make players on her team better, Wise also can adjust the game plan for players on the other side of the net. Quick adjustments to opposing players are what makes this Florida team so good, especially late in games.

It was evident early on, however, that Wise had noticed her as well. Hans was held to .128% hitting and was blocked multiple times. Shainah Joseph spoke on the strategy of containing Hans.

The Gators come back on Sunday to play another SEC rival, Georgia. Coach Wise said that the Georgia team is a lot like the A&M team they just played, a fearless squad with nothing to lose.