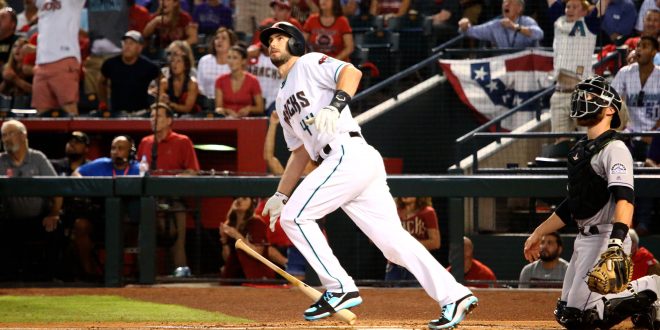 The Arizona Diamondbacks managed to hold off a pesky Colorado Rockies bunch in a back and forth battle Wednesday night to win the National League Wildcard Game. The starting pitching matchup was expected to be a great one, but offense ruled the night.

Towards the end of the regular season, Rockies starter Jon Gray was one of the best pitchers in the league. In September, Gray sported a 2.57 ERA. One of those September starts was in Arizona and he was stellar, surrendering just two earned runs. In the same start, he also compiled 10 strikeouts.

Gray didn’t come close to duplicating that success Wednesday night. The Diamondbacks, particularly first baseman Paul Goldschmidt, struck early, forcing Gray to exit the game after fewer than two innings. The 25-year-old pitcher gave up a three-run homer to Goldschmidt in the first inning, energizing the Arizona crowd immediately. The homer was one of seven Diamondbacks hits off Gray. After the game, Goldschmidt said, at the time, he was just trying to get the runner in from third.

A two-run homer from second baseman Daniel Descalso extended the Arizona lead to 6-0. With ace Zack Greinke on the mound, the Diamondbacks had reason to feel confident about their chances to win.

Colorado could’ve folded after digging themselves into an early deficit but they didn’t. Greinke is one of the MLB’s best pitchers. The 2009 Cy Young Award winner is normally as reliable as anyone in baseball, especially when given an early lead. He seemed to be in cruise control through three innings, but in the fourth everything changed.

Ladies and gentlemen, we are right back in this ballgame.

Right. Back. In. It. pic.twitter.com/VbFWPzVajw

Rockies manager Bud Black said no one could have predicted the starters to pitch the way they did and called the game a “heavyweight fight.” Colorado would go on to add another run on a sacrifice from center fielder Charlie Blackmon to cut the deficit to 6-5 in the top of the seventh.

Just as easily as the Rockies could’ve packed it in early, the Diamondbacks could’ve succumbed to the building Rockies’ momentum. Arizona managed to stand tough, though, responding immediately in the bottom of the seventh with a two-run triple from relief pitcher Archie Bradley. The triple by Bradley was the first extra-base hit of his career, giving Arizona an 8-5 lead.

The Rockies would fight back one more time in the eighth inning with back-to-back homers from Arenado and shortstop Trevor Story, making the score 8-7. However, once again, the Diamondbacks responded right away. A two-run triple from center fielder A.J. Pollock and then a RBI bunt single from catcher Jeff Mathis would build the Arizona lead to 11-7.

The Rockies did score a run in the ninth on a single from right fielder Carlos Gonzalez. That made the score 11-8, the eventual final.

The Diamondbacks now hit the road to take on the Los Angeles Dodgers in the NLDS. Arizona is 11-8 against the Dodgers this season. The Diamondbacks won the last six matchups between the two NL West teams during the regular season. Diamondbacks manager Torey Lovullo says his team is not intimidated by the Dodgers, who finished the season with a MLB-best 104-58 record.