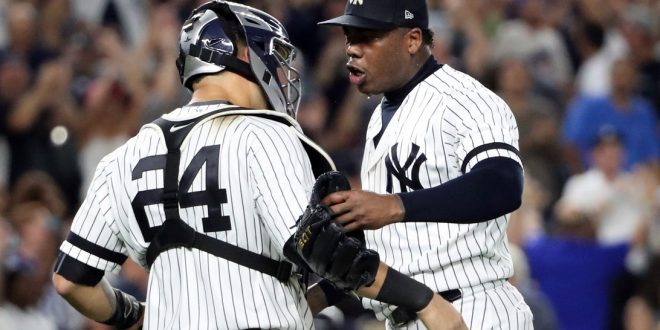 Indians lose to the Yankees in game 3 ALDS

In front of a sold out audience, Greg Bird homered off Andrew Miller to give the New York Yankees a 1-0 victory in Game 3 of the American League Division Series. The Yankees were and still are in a win-or-go-home situation with the Cleveland Indians leading the best-of-five series, 2-1, but Bird’s homer guaranteed the Yankees one more game.

Miller pitched a strikeout in a bases loaded jam in the sixth inning. He came out for the seventh because the Yankees had Bird and Jacoby Ellsbury as two of their first three batters.

Then, Miller threw a 96 MPH fastball up and in that bird drove into the second deck in right field to the end the scoreless tie. It was Bird’s second homer of the ALDS. He hit nine during a shortened regular season where he was injured.

For Miller it was the fourth homer he allowed this season and the first against a lefty since the Dodgers’ Cody Bellinger.

Yankees starter Masahiro Tanaka and the Tribe’s Carlos Carrasco were locked in a scoreless duel going into the sixth. But Carrasco lost the strike zone and loaded the bases with two out to bring Miller into the game. Tanaka, throwing his sinker with great effectiveness, held the Indians to three hits over seven scoreless innings with seven strikeouts. Tanaka showed to able to perform under pressure.

David Robertson and Aroldis Champman completed the three-hitter. Chapman went the final 1 1/3 innings for the save.

The Yankees and Indians have played 18 postseason games and the Indians lead, 10-8.

But the Yankees, in their second elimination game this postseason, ended a five-game losing streak against the Indians this year.

Game 4 is scheduled for Monday night at 7 with Luis Severino set to start for the Yankees.