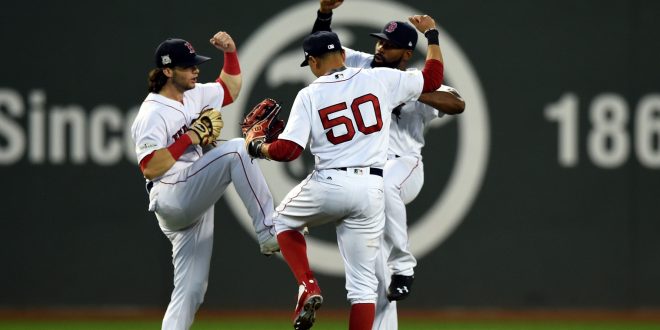 The Boston Red Sox avoided elimination from the American League Division Series with a 10-3 victory on Sunday.

The game started off poorly for the Red Sox. Boston’s starting pitcher Doug Fister gave up three runs in the first inning to put the Red Sox down 3-0.

The Red Sox got back on track with big hits and runs from Hanley Ramirez, Rafael Devers, Mitch Moreland, and Jackie Bradley Jr.

Relief pitcher David Price came into the game during the fourth inning. Price was expected to help the Red Sox protect their first lead of the series. Once entering the game, he pitched a dominate four scoreless innings, keeping the Red Sox in the game with a 4-3 lead at the top of the seventh.

After the game Price made it clear that guys just want to step up and help the team succeed.

This is not the first time that Price has been successful in the post season out of the bullpen.

In the 2008 AL Championship series, Price helped the Tampa Bay Rays beat the Red Sox in a competitive seven game series. This series is what reminded Red Sox owner John Henry that the ace could be a key player in any situation.

In a interview with ESPN before the start of the series, Henry stated, “Maybe we’ll see that again this year. I think we will.”

The Red Sox and the Astros will faceoff in game 4 this afternoon. First pitch will be at 1:08 p.m.

The best-of-five series makes this a must win for the Red Sox in order to keep their playoff hopes alive.