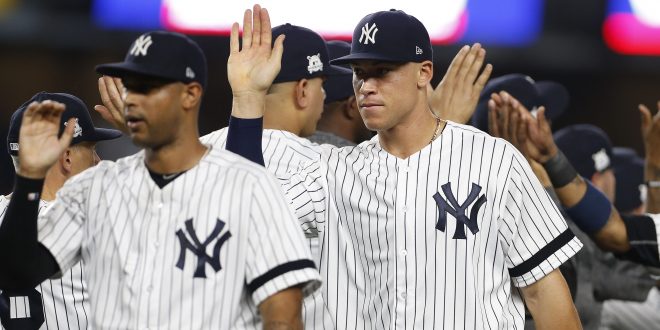 Following a 9-8 Game 2 loss in Cleveland, the chances of capturing championship number 28 looked bleak for the New York Yankees. Statistically speaking, getting to a Game 5 after being down 0-2 in a divisional series is a great accomplishment. Just 16 of the 78 teams to be down 0-2 in the history of the MLB postseason have forced a winner-take-all Game 5. Prior to Wednesday, only nine teams had gone on to complete a comeback. That number is now 10 after the Yankees took down the Cleveland Indians by a score of 5-2.

Before this season, the last time the Yankees won an ALDS was in 2012. Since then, New York’s roster has seen a bounty of changes take place. The dominant players of old, such as Derek Jeter and Mariano Rivera, have settled into retirement. However, the steady arm of C.C. Sabathia has remained. In that 2012 ALDS against the Orioles, Sabathia won two games and boasted a 1.53 ERA.

On Wednesday, Yankees fans watched a different Sabathia on the mound. A pitcher with less velocity and aggression, Sabathia would be the first to admit he is not the intimidating ace he once was. He is, however, still a winner. Sabathia retired the first nine batters he saw on Wednesday night, striking out six. He went on to work a scoreless fourth inning and, for a team with a dominant bullpen like the Yankees, that was more than enough.

Shortstop Didi Gregorius gave Sabathia run support early. He hit a solo homer in the first and then blasted a second homer in the third, driving home two more runs, to give the Yankees a 3-0 lead. Gregorius said he focused on the now instead of dwelling on his previous match ups against Cleveland ace Corey Kluber.

After Sabathia cruised through four innings, he met a bit of resistance in the fifth. Indians catcher Roberto Perez and third baseman Giovanny Urshela gave the Cleveland offense a bit of life with a pair of RBI singles to cut the Yankees lead to 3-2.

Enter right-hander David Robertson. He’s been one of the best relievers in baseball all season and was no different Wednesday. He recorded the last out of the fifth and went on to pitch 2.2 innings of scoreless work.

Ninth Inning Nail in the Coffin

Following Robertson, the Yankees then turned to flame-throwing reliever Aroldis Chapman. After he worked a scoreless eighth, the Yankees were still clinging to a 3-2 lead. The stage was then set for Yankees outfielder Brett Gardner after fellow outfielder Aaron Hicks singled and third baseman Todd Frazier walked to put two on in the top of the ninth.

Gardner singled to score Hicks from third then Frazier scored after a throwing error by Indians right fielder Jay Bruce. That gave Chapman and the Yankees a 5-2 lead headed into the ninth.

Chapman would go on to shut the door on the Indians’ season and allowed just one hitter to reach base over his two scoreless innings of work. After the game, Cleveland manager Terry Francona said it was an honor to go through the year with his bunch. He also added that his team made some uncharacteristic mistakes throughout the series.

Our memorable season comes to an end.

What a ride. THANK YOU for all your support. #RallyTogether pic.twitter.com/GwfFlfXi2E

The Yankees now move on to face the Houston Astros in the ALCS.  Game 1 of the ALCS will be on Friday at 8 p.m.

I'm an above-average golfer with surprisingly great touch around the greens. Click on my twitter link for some sports talk.
@Ry_McGinn
Previous Gator Soccer Squares Off Against In-State Rivals Seminoles
Next Strasburg and Nationals Force Game 5 With Cubs