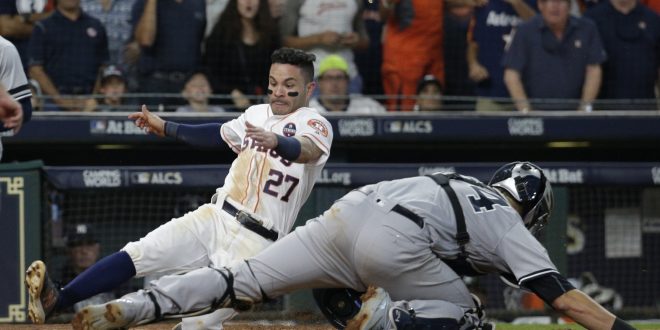 The New York Yankees punched their ticket to the ALCS with Wednesday night’s Game 5 win over the Cleveland Indians (NYY 5, CLE 0), making a comeback after losing the first two games of the ALDS. The Houston Astros ended the Boston Red Sox in their ALDS matchup in four games last week.

The Yankees hit seven home runs in their five-game ALDS win over the Indians while the Astros went deep eight times in their four ALDS games against the Red Sox.

The Astros pair those home runs with the game’s lowest strikeout rate. Houston’s hitters struck out in 17.3 percent of their plate appearances during the regular season, which is below the 21.6 percent average for the league.

The Yankees on the other hand had baseball’s 13th highest strikeout rate at 21.8 percent.

The Yankees pulled off a comeback in the ALDS against the AL champion Indians, but for ALCS it’s expected to be tougher against the Astros.

But after the last win for the Yankees Joe Giraldi said they’ll do what it takes to win.

If the Yankees lose again the Astros will make it to the World Series for the second time in franchise history. If the Astros do win they will have a strong hold on the series. Teams that win the first two games of a best-of-seven postseason series go on to win the series 83.8 percent of the time. But if the Yankees win it will be the first time they win a postseason game that is not in an elimination game and not to mention they haven’t lost at home this season yet, so they definitely want to push to stay undefeated at home.

Game 3 is set for the Yankees to face the Astros Monday night at the Yankees stadium at 8 p.m.