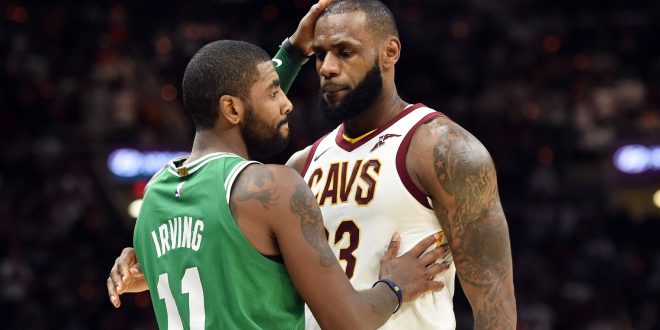 Excitement filled Quicken Loans Arena as the Cleveland Cavaliers prepared to face the Boston Celtics on opening night of the 2017-18 NBA season. Both teams enter the season with new additions to their roster and hopes of competing for a championship. All eyes were fixed on Celtics guard Kyrie Irving and his highly-anticipated return to Cleveland. Yet, midway through the first quarter, the enthusiasm would come to an abrupt halt.

With just over five minutes into game, Celtics forward Gordon Hayward would suffer a gruesome ankle injury while falling awkwardly on an alley-oop attempt. Silence permeated the arena as fans and players reacted with shock and disbelief.

Reaction to Gordon Hayward's injury is hard to watch. This is the edited version. No closeup. #Cavs #Celtics pic.twitter.com/M94NHFkazb

Hayward would eventually be carted off the floor on a stretcher. He has officially been diagnosed with a dislocated ankle and fractured tibia, and is scheduled to undergo surgery later today. The injury places a huge damper on Boston’s season after acquiring the All-Star forward in free agency.

Even in the aftermath, the show must continue. The game would go back-and-forth and remain tight into the fourth quarter. Cavaliers forward LeBron James would give the Cavs a 99-98 lead on a spin-move in the paint with 1:19 remaining. Moments later, James would find teammate Kevin Love open in the corner for a three-pointer to put the Cavs up 102-98 with 46 seconds remaining. The Celtics, however, would have a chance at the end. Down three points on the final possession, Celtics guard Kyrie Irving would attempt a three-pointer over LeBron James as time expired, but would fall short as the Cavaliers win 102-99.

Kyrie Irving would finish the game with 22 points, 10 assists and four rebounds in his debut with Boston. Meanwhile, former teammate LeBron James would post a near triple-double with 29 points, 16 rebounds and nine assists. Kevin Love would also add 15 points and 11 rebounds in the victory.

Following Hayward’s horrific injury, players from around the league chimed in with prayers and support.

LeBron James says the injury was extremely unfortunate and wishes Hayward a speedy recovery. Meanwhile, Kyrie Irving says the Celtics must pick themselves up and respond in Hayward’s absence.