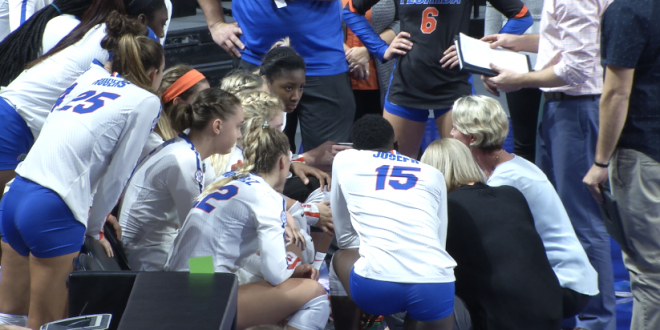 Florida volleyball coach Mary Wise moved to 42-0 against Alabama Friday night as the Gators beat the Crimson Tide in three sets. The squad looked to bounce back and have a new energy after losing last week to Kentucky. Both offensively and defensively, the Gator team dominated from the very first serve.

#GatorsWin! Great to dust off that L and get back on track ✊✊ pic.twitter.com/8pcnLJg6Co

A big question mark after the Kentucky game was whether or not the outside hitters would be able to come back strong. Carli Snyder, who had very frustrating games against both Kentucky and Ole Miss, only notching 14 kills in those two games. Tonight, she looked unstoppable. 14 kills, including her 1000th kill of her collegiate career, and 11 digs. Snyder was all over the court and looked determined to get past her slump.

Coach Wise praised her senior pin-hitter after the game. Wise also talked about Rachael Kramer; the middle hitter had another outstanding game with 13 kills and was a major factor defensively as well.

Rachael crushes one for set point! 25-18#Gators up 2-0 pic.twitter.com/RfYmSpJCYz

Serving was another factor that helped the Gators sweep the tide as it looked much more consistent than it has recently. However, most casual fans will look at the box score and see that the Gators had no aces, but that does not mean that their serving was not effective. Every player seemed to step up from behind the line.  Coach Wise spoke about how even though the stats won’t show it, serving was big in the win.

While the offense was a big factor, it was the Gator defense that made the difference. The Gators dominated every defensive stat and made a ton of hustle plays.

The always consistent libero Caroline Knop was solid again with 18 digs in the three-set match. Coach Wise had a lot of good things to say about her as well.

The front line also had a big hand defensively. The Gators had 10 total blocks, at one point going on a 4-0 run just off of the blocking from Cheyenne Huskey and Rhamat Alhassan. The front line definitely was a big factor.

The front line also was able to maintain Leah Lawrence all game. Bama’s kill leader could only grab two kills for the entire match. Consistent blocking and covering of Lawrence frustrated her early and she was never able to recover.  The Gator defense also frustrated freshman Christine Jarman to a -.071 hitting percentage for the Tide.

The Gators do not get a lot of time off as they travel to Auburn to play the Tigers on Sunday.

Wise mentioned the busy schedule and said that the “scouting will begin tonight on the bus on the way to Auburn.”

The match is set for 2:30 and WRUF will have coverage as always.