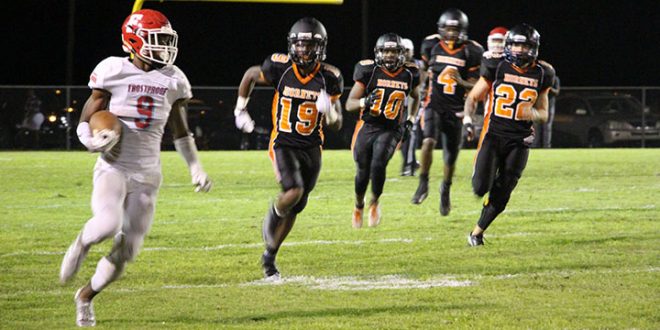 Frostproof running back Jeremiah Salaam escapes a group of Hawthorne defenders as he marches in for a touchdown. Photo taken by David Street.

It was a tale of two halves during this high school football matchup between the Frostproof Bulldogs and the Hawthorne Hornets. The first half was an offensive slugfest while the second half was a defensive struggle.  In the end, Frostproof comes out on top 41-34.

23 seconds into the first quarter, Frostproof slotback Deonte McMahon scored a 22-yard rushing touchdown for the Bulldogs. The PAT afterward was good, making it 7-0. The Hornets answered right away when running back Devin Lawrence ran 60 yards for a touchdown. The PAT tied the game at 7. About four minutes later, McMahon ran for another touchdown, this time for six yards. The PAT was good, making it 14-7 Frostproof. Lawrence answered with another touchdown, this time for three yards, to help tie the game at 14.

In the second quarter, Lawrence scored his third rushing touchdown of the game from one yard, giving the Hornets the lead for the first time. The PAT made it 21-14 Hawthorne. The Bulldogs, however, would quickly strike back as McMahon rushed for his third touchdown, this time for 50 yards, to help tie the game at 21. Just like before, the Hornets would lean on Lawrence for another rushing touchdown. Lawrence’s fourth touchdown run of the night went for 60 yards. The PAT was good, making it 28-21 Hawthorne. Frostproof quarterback Josh Jenkins then threw a 37-yard touchdown pass to running back Jeremiah Salaam. The PAT, however, was no good, making it 28-27 Hawthorne.

As the second quarter was nearing an end, Hawthorne scored its first passing touchdown of the night when quarterback Kahleil Jackson connected with wide receiver Devonte Bowie for 27 yards. The PAT was no good, making it 34-27 Hawthorne to end the first half.

Where did all the offense go?

After combining for 61 points in the first half, both offenses were practically nonexistent in the second half. Salaam rushed 60 yards for a touchdown to help tie the game at 34. Those would be the only points scored in the third quarter.

For the majority of the fourth quarter, no points were scored. That, however, would change when Frostproof’s Chester Boatwright intercepted Jackson’s pass. Later, Boatwright caught a 19-yard touchdown pass to help give the Bulldogs the 41-34 lead. Hawthorne had a chance to tie the game in the end, but Jackson had nowhere to go as Frostproof’s defense came up with a big stop to help secure the 41-34 victory.

After the game, Frostproof head coach Shannon Benton complimented Hawthorne’s team. He then complimented his own players for the hard work they put in when asked about the team’s defense not giving up any points in the second half after giving up 34 in the first half.

WITH 23 SECONDS LEFT IN THE GAME. Josh Jenkins to Chester Boatwright! 41-34 DAWGS. 🐶🏈🌋 pic.twitter.com/PZJgDTtG1c