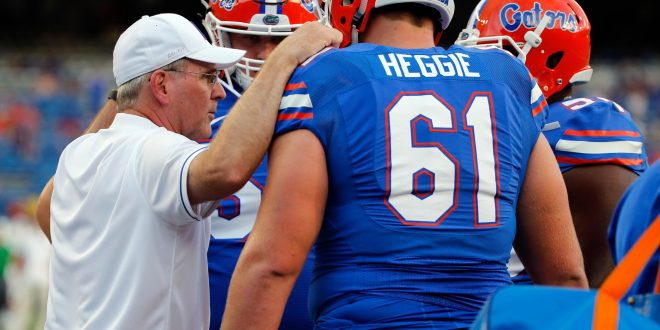 Florida Gator football offensive lineman Brett Heggie is preparing for the Florida Georgia game this Saturday at 3:30 pm.  The notorious rivalry will take place at EverBank Field in Jacksonville. The Gators are ranked an average 3-3 while the Bulldogs are at an astounding 7-0. Last year Florida beat Georgia 24-10 rattling Bulldogs then freshman quarter back Jacob Eason. This year well see if Gator signal-caller Felipe Franks, with the help of Heggie and the o-line, will have the skills to upset the Bulldogs.

Recently, Florida football has had to deal with many players out with injuries or suspensions. Ten players have been suspended so far, including offensive stars Antonio Callaway and Jordan Scarlett. When asked about how the Gator’s have blocked out all the noise Heggie said that the team is just focused on playing the game and not worried about the outside noise.

Heggie seems very confident in the Gators that they can get past Georgia defense. When asked how important it will be to hit some deep balls around Bulldog defense, Heggie states that as long as Felipe makes plays with the regular game plan, the Gators are gonna be fine.

The Gators are in desperate need of a win after there last two consecutive loses against LSU and Texas A&M. When asked how much a win against Georgia would change things for the team and the direction of the season, Heggie stresses that no matter when it comes a win is a win. He says we can’t focus on the past anymore that the team has to move forward.

Heggie also mentioned freshman running back Malik Davis. Davis has shown great consistency on offense, where the team has struggled.

Heggie, Davis, Franks and the rest of the Florida Gator football team will be put to the test against Georiga this Saturday for an exciting game.