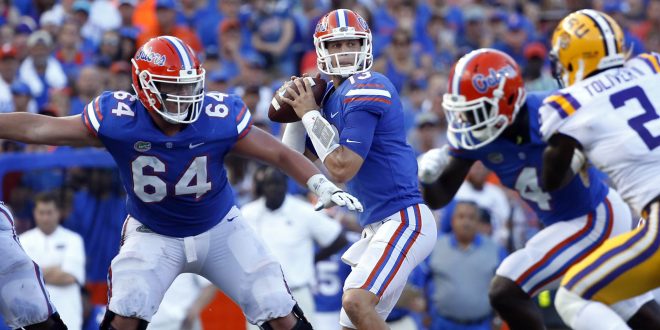 Tyler Jordan and the Gators Prepare for South Carolina

Following a 45-16 loss at Missouri, the Florida Gators (3-5) will look to bounce back this weekend as they hit the road to face the South Carolina Gamecocks (6-3).

With two consecutive blowout losses, it won’t get any easier for the Gators this week. Led by sophomore quarterback Jake Bentley, the Gamecocks boast the fourth-best passing offense in the conference at 220.67 yards per game. Meanwhile, Gators junior offensive lineman Tyler Jordan says the Gamecock’s defense also presents many challenges.

Head coach Randy Shannon announced on Monday that senior quarterback Malik Zaire will start on Saturday against the Gamecocks. Zaire passed for 158 yards and one interception in the team’s loss at Missouri. Jordan says Zaire has practiced hard and executed well during the game.

With losses piling up for the Gators, there’s no shortage of frustration throughout the team. The Gators will need to win-out in order to reach a bowl game. Jordan says while it’s been frustrating, the team must take it one game at a time. Meanwhile, with rumors surrounding the head coaching position, it’s easy to become distracted. Jordan says he hasn’t paid attention to the rumors and will worry about the matter when the time comes.

Jordan and the Gators are set to face South Carolina in their last conference game of the season on Saturday at noon, with televised coverage on CBS. ESPN Gainesville will also provide live coverage of the game, including pre and postgame shows.

Matthew is currently a senior, majoring in telecommunications with a minor in business administration.
@matt_levay
Previous Massey Finally Starting To Make An Impact
Next Gators Defensive Lineman Bryan Staying Focused On Task at Hand