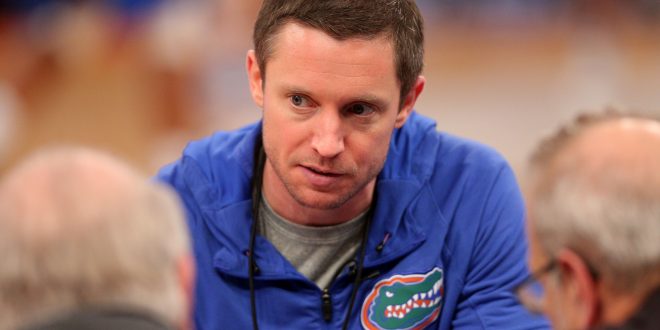 No. 8 Florida Gators Ready For Season Opener Vs. Gardner-Webb

The time has officially come. Monday will mark the end of a 231-day waiting period between the Gators’ heartbreaking loss to the South Carolina Gamecocks in the 2017 Elite Eight and this year’s season opener vs. Gardner-Webb. Florida’s average margin of victory in their two official pre-season games was 39 points, dominating both Jacksonville University of the Atlantic Sun and the University of Tampa, a Division II school. Come 7 p.m. on Monday, a new chapter begins in the ongoing adventure known as Florida Gator basketball.

Mike White is now entering his third season with the Florida Gators. He’s swayed a lot of people’s opinions who believed that Billy Donovan just simply couldn’t be replaced. He’s gone 48-24 in his first two seasons in Gainesville, earning SEC Coach of the Year honors last season. While White will say that his team’s offense is ahead of his defense, and that his squad is still making too many mental mistakes, national and local media alike have recognized that this year’s team could indeed be something special.

1 more day until Florida opens up their season against Gardner-Webb. Can you name all four players? #Gators pic.twitter.com/CSEsgUlo0r

Florida’s official pre-game notes have listed this as their probable starting lineup vs. Gardner-Webb.

Those notes would indicate that Chiozza is still feeling the effects of a sprained shoulder suffered vs. Jacksonville University. If he’s unable to go, KeVaughn Allen will handle the brunt of the point guard work on Monday, with Michael Okauru providing some relief off of the bench. Chris Chiozza is Florida’s only returning four-year senior on the team.

The Gators have won 26 straight season openers, with their last loss coming against USF in the first game of the 1990-1991 season. That year marked the start of the Lon Kruger era.

Last year, the Bulldogs finished 19-14, going 11-7 in Big South play. Gardner-Webb is KenPom’s 240th ranked team out of 351 NCAA Division I basketball programs headed into the 2017-2018 season. The team’s leading scorer from last season, Laquincy Rideau, transferred to USF this off-season, while their second-leading scorer, Tyrell Nelson, graduated. The Bulldogs lost 77-45 on Friday night to the Miami Hurricanes in their season opener.

In the course of the past week, 2018 5-star point guard Andrew Nembhard and 2018 4-star shooting guard Noah Locke have both sent in their National Letters of Intent to the University of Florida. Small forward Keyonate Johnson, the 104th-ranked player in the Class of 2018, per 247, also committed to the Gators on Friday night, choosing Florida over Texas Tech and Virginia Tech. Nembhard is a talented pass-first point guard, while Locke is a knockdown shooter. Johnson has been described as an extremely athletic wing who can defend with the best of them.

You can watch Monday night’s game, starting at 7 p.m., on ESPNU and the WatchESPN. Roy Philpott and Brooke Weisbrod have the call. You can listen to the game on the Gator IMG Sports Network and Sirius 138/XM 190, with Mick Hubert and Bill Koss on the call. Florida has not lost a season-opener at home since the 1983-1984 season, when Stetson took down the Norm Sloan-led Gators.

If you didn’t get a chance to check out our first SEC Power Rankings of the season, you can by clicking here.

The story of ONE. Our story continues Monday. Hoops szn. #OneTeam pic.twitter.com/ghNtuFqrO7