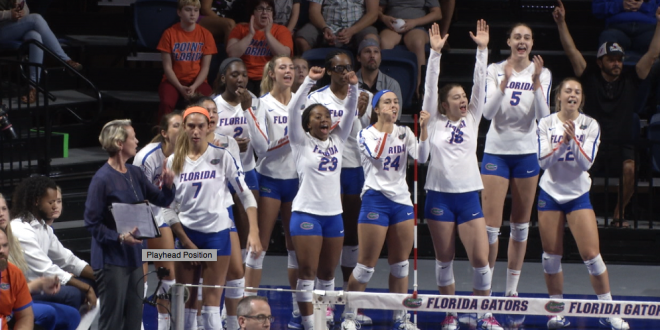 It was Senior Day for the Gator volleyball team today; the team knew they needed to play well against a tough Missouri Tiger team and they did. Stumbling in the second and third sets, the team was able to overcome the Missouri Tigers and win in four sets.

On a day to honor the seniors, the seniors returned the favor with outstanding performances.

Carli Snyder had a great day with 13 kills and 16 digs. Snyder was all over the court diving for digs and spiking clutch kills. Not one player had more effort than Snyder today and that Floridaeffort was displayed in the second set when an errant ball floated over near the media table off to the side of the court. Snyder dove over computers, papers and reporters to save the ball. She set the tone for what would be a game that required a ton of her effort.

While the Gators couldn’t take advantage of their teammates hustle on that play, they made sure to not take it for granted again. Snyder’s effort and devotion rubbed off on those around her and was a major reason why the team was able to stage a comeback to ultimately win the match.

Another Senior, Shainah Joseph, put on a clinic in today’s win. She could not be stopped and was able to notch a career high 20 kills. Missouri blocked inside well and took most of the power hitters away. Joseph took advantage of this and shined as she attacked from the outside. Big spike after big spike, the Tigers were unable to hold Joseph back. No one was more impressed than Florida head coach Mary Wise after the game.

Joseph also displayed a calm demeanor. Sophomore Rachael Kramer spoke about how all of the seniors’ calm attitudes during the game rubbed off on an emotional day.

Errors have been an issue for this Gator team for a while now. The team often starts slow and has to dig themselves out of a hole late in the game. Today was no different. Service errors and attack errors plagued the Gators early and once again the Gators had to find a way to come back.

Kramer talked about why they were down early and were forced to find a way to claw back into the game.

In the second set of the match, Missouri came out very aggressively, not allowing UF to take the initiative and put them back on their heels. The Gators were unable to find any rhythm. This continued into the third set. Down 21-24 and looking at having to play from behind, the Gators stormed back. Going on a 5-0 run led by Joseph’s spikes and Alhassan’s blocking, the Gators pulled a victory out of their hat again.

Joseph remained very humble even after this, giving a lot of the credit to the set-up specialist Allie Monserez.

There will be no rest for the weary as the Gators come back on Wednesday to play Texas A&M. Traveling to College Station just mere days after this emotional game will test the players’ endurance. Hopefully, it will not impact their play for these last few regular season matches.

@dyrudolph
Previous No. 8 Florida Gators Ready For Season Opener Vs. Gardner-Webb
Next Coach K Gets 1,000th Win at Duke