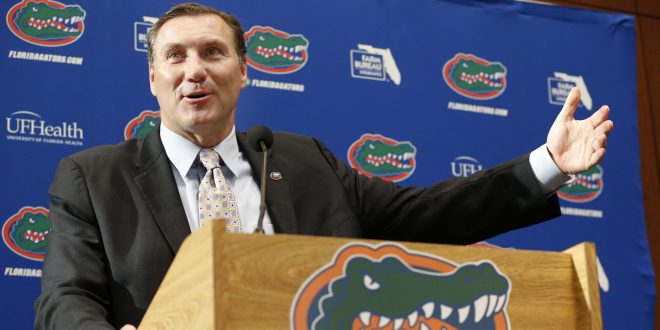 The Florida Gators and Dan Mullen are wasting no time on looking toward the future.

After Mullen was announced as the new coach for Florida, he would waste no time answering questions. Among the buzz around the conference, the highlights include his arrival, challenges lying ahead and what his plan for success is.

The buzz around Mullen’s arrival would start when he got off his plane. As many were able to notice, Mullen returned to Gainesville sporting his 2008 national championship ring.

When the initial announcement was made of Mullen’s arrival, the college football world responded with nothing but positivity and open arms. Among those who responded to Mullen’s return to Florida include Kirk Herbstreit and former pupil Tim Tebow. The energy and excitement around his arrival is still present, even after his arrival yesterday.

The championship ring, of course, comes from his previous stint in Florida as the quarterbacks coach and offensive coordinator from 2005-2008. Under his watch, the Gator offense was steamrolling the competition, specifically the SEC.

Leading the SEC in multiple categories, Mullen was a big part of bringing the Gators two national championships. Mullen holds a 44-9 record, which led the SEC during that time period.

Arriving to Gainesville yesterday morning, the first image of Mullen getting off the plane was highlighted with a Gator Chomp.

Dan Mullen with a chomp chomp as he gets off plane #Gators pic.twitter.com/YQ7bjyboTC

Highlights of the Conference

Mullen’s introductory press conference did not shy away from being memorable and full of highlights. One of the biggest questions heading into the 2018 season for Florida is how the offense will improve compared to this season. In the press conference, Mullen highlighted how he plans to play spread offense, and play with “relentless effort.”

When asked about what his priority with Florida is at the moment, he was very quick to give an answer: Recruiting. With that being his current top priority, Mullen is also already thinking about his staff. While rumors are already spreading, Mullen would note that he is currently evaluating the current staff. Mullen’s final staff will not be set until the new year.

When talking about recruiting, Mullen would simply talk about how much of an impact the Gator logo really makes on recruiting. Specifically, he spoke about how “every player in the country wants to hear what you say.”

“That will be a tough game. Emotional in some ways to have to go back there.” — Mullen on Sept. 29 at Mississippi State

With Mullen’s press conference now in the books, highlighted by the above, the future of Florida football will now go in a new direction. The excitement around Mullen’s return is certainly palpable, and he is hoping to translate it. Under the Mullen regime, Florida is looking to return to the championship standard that many feel was lacking in 2017.

The Start of Mullen’s Regime

With the new regime of Dan Mullen, the Gators look to turn the sorrow from the 2017 season into victory in 2018. They look to make waves in the college football world with a home showdown against Charleston Southern on Sept. 1, 2018. The game will serve as both the season and home opener for the Gators. Stick with ESPN Gainesville for further coverage of Florida’s new coach, as well as everything else Florida football.