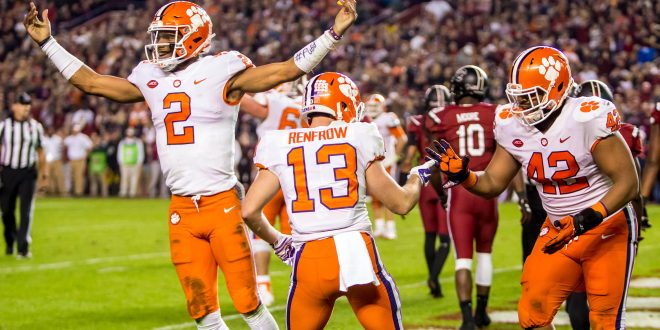 December 3rd is less than a week away. With the playoff selection show coming up, tonight’s poll gets closer to who will get a coveted playoff spot. The top 4 will undeniably change following last weekend’s action.

Following Alabama’s 26-14 loss to Auburn, there will be a new No. 1 tonight. But, that won’t be No. 2 Miami, who picked up a loss to unranked Pittsburgh this weekend as well.

There could likely be new faces in the top 4 then. The Clemson Tigers and Oklahoma Sooners both took care of business this weekend against South Carolina and West Virginia respectively. The Wisconsin Badgers (12-0) still remain one of the only two undefeated teams (UCF being the other). Auburn could jump into the top 4 following their victory in the Iron Bowl.

It is likely that the selection will have Clemson and Oklahoma as No. 1 & 2 tonight. Miami’s loss to an unranked opponent will be too costly and see them drop out of the top 4. The question remains whether Alabama (11-1) will drop out of the top 4 and whether Auburn (10-2) will be in tonight’s top 4 regardless of their 2 losses.

This weekend some teams will have the opportunity to make their case for the playoffs – others will have to watch from home.

Their loss to Auburn not only ruined their undefeated season but now Alabama will not get a chance to play in the SEC Conference Championship. The Crimson Tide will have to watch as Auburn and Georgia compete for the championship, and wait for this weekend’s results elsewhere for a chance to make the playoffs. Nonetheless, Alabama Head Coach Nick Saban still believes his team has a case for the playoffs, regardless of this upcoming weekend’s results.

Auburn and Georgia, however, will look to make the most of this spotlight. A win for either team would certainly boost their chances of getting a playoff spot. A loss would surely leave them out.

In the ACC, Miami’s loss, although to an unranked opponent, had no Championship implications. Therefore they will get a shot to make their case for a playoff spot again this weekend when they face the Clemson Tigers.

Oklahoma will look to retain their top-4 spot when they take on TCU in the Big 12 Championship game. In the Big 10, Wisconsin will try to stay undefeated as they take on an Ohio State team that is looking to squeak into the playoff picture again.

While tonight’s playoff poll is a step closer to the final top 4, there is still plenty of movement that can happen this weekend.

You can watch the fifth College Football Playoff Poll release tonight on ESPN at 7 PM EST.

@gabymno
Previous Dan Mullen Returns to Florida as Head Coach
Next Florida Rises to No. 6 in Latest AP Rankings