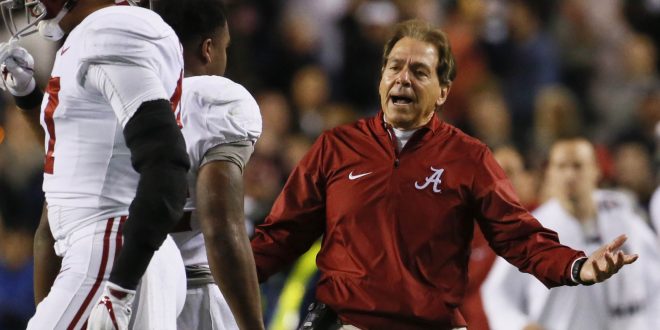 Last week’s rivalry weekend saw the top two teams go down on the road. A major shake up to the top four in the rankings was expected. In this week’s rankings, the the top four looks very different from a week ago. However, we now have a clear look at what’s at stake this weekend during championship weekend. The top four consists of Clemson at one, Auburn at two, Oklahoma at three, and Wisconsin at four.

After the top two teams, Alabama and Miami, losing last week, one might expect the playoff picture to be a jumbled mess. This is not the case. These upsets actually made the playoff picture clear heading into championship weekend. This is because the teams in contention for a coveted spot in the playoff will meet in their respective conference championship games. The now number one ranked Clemson Tigers look to win their third straight ACC title and return to the playoff as the face now seventh ranked Miami. Common belief is that the winner of this game will punch their ticket to the College Football Playoff. The same can be said for the SEC and Big Ten Championship Games. The winner of the Auburn-Georgia rematch will represent the SEC. The winner of the Ohio State-Wisconsin showdown should represent the Big Ten, with Ohio State needing some help if they win.

Still a Chance for Former Champs

The Alabama Crimson Tide have been a staple in the College Football Playoff field since its inception. They have made it to the championship game the last two years. Their chances of making it to the Playoff for a fourth straight year took a hit with their 26-14 loss to Auburn in the Iron Bowl. After Saturday’s loss, Alabama head coach Nick Saban made a case for his team making the playoff. Alabama was given mercy by falling to five in the playoff rankings, allowing them to still be in the mix. The Crimson Tide’s resume includes wins against three ranked teams in this week’s rankings (Fresno State, LSU, and Mississippi State). For Alabama, they still have a small chance of making a return trip to the Playoff.

The College Football Playoff was designed to favor conference champions. This year’s playoff should feature the ACC champion, the SEC champion and the Big Ten champion. However, could there be room for two SEC teams in the field this year? Yes. Fans of the SEC and Alabama will become the biggest TCU Horned Frog teams this weekend. TCU plays Oklahoma in the Big 12 Championship Saturday. If TCU upsets the third ranked Sooners, that could open the door for a one-loss Alabama team. The committee has shown to put teams into the Playoff even if they didn’t win their conference. They put Ohio State in the top four a year ago. If it’s between a one-loss Alabama, who lost the last week of the season to the potential SEC champion, or TCU, a two-loss Big 12 Champion, the decision could be in Alabama’s and the SEC’s favor.

Once the dust settles on championship weekend, the Playoff field will be announced Sunday at noon.