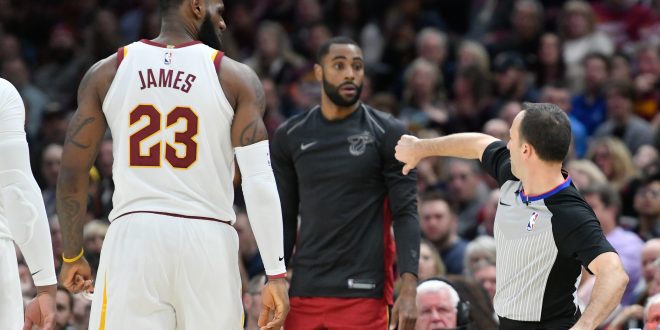 Lebron James Ejected for the first time in career Tuesday

In 15 years and 1,081 regular season games in the NBA, LeBron James was never ejected from the game; however, Tuesday night, his frustration got the best of him and James was tossed with 1:59 left in the third quarter. The Cleveland Cavaliers star forced a turnover and dribbled up the court only to miss his attempt at a layup. LeBron argued with referee Kane Fitzgerald that Miami forward James Johnson fouled him, but Fitzgerald gave LeBron a technical foul and kicked him off the court.

The Cavaliers home crowd was audibly unhappy with the call and even the commentators were a little uncertain.

The #PlayersOnly crew weighs in on @KingJames' first career ejection.

LeBron and the Cavs against the Heat

James went into Tuesday’s game averaging 28.6 points per game and 6.9 rebounds, among other MVP-worthy statistics. Prior to his ejection, James was on a roll and well on his way to improving these numbers. He scored 21 points in the first three quarters with 12 rebounds and six assists in 29 minutes on the court. The Cavs were up 93-70 when LeBron left in the third quarter.

Cavs teammate Kyle Korver said what many basketball fans and players would agree with: that the Cavs lost their best player. Ultimately, however, the Cavs were able to secure the win in the last quarter without James.

Kyle Korver joins @FSOAllieOop after the @cavs' 9th straight win and describes what it was like to see LeBron James' first career ejection. #AllForOne pic.twitter.com/CraE4GhjMX

James calmly explained his side of the story and stated that in the end it’s the win that matters.

Coach Lue did not express frustrations with Fitzgerald, but instead says that the referee did what he should have done. Lue says no matter what James’ argument was, he shouldn’t be arguing with the referee’s call, commenting,

LeBron and the Cavs against the Hawks

James will be back in action when the Cavaliers play the Atlanta Hawks Thursday. Clevelend will be shooting for their 10th victory in the current winning streak, the longest since 2015. The game tips off at 7:30 p.m.

I grew up in the Washington, DC area and now I'm a Gator. I'll always be learning more about myself, others and the world around me. And I'll always be talking about sports.
@kelsey_godman
Previous Major Shake Up to The College Football Playoff Rankings Ahead of Championship Weekend
Next Mississippi State Names Joe Moorhead As New Head Coach, Tennessee Continues Search