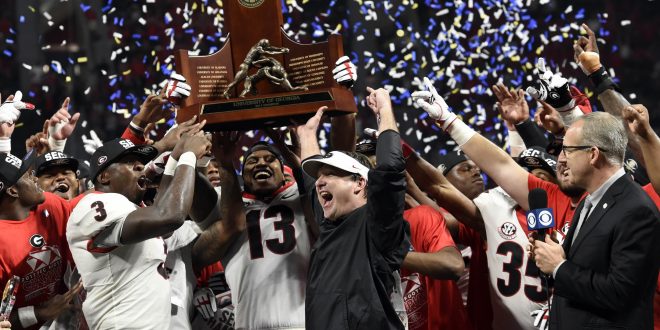 With a win against the Auburn Tigers, Georgia claimed the program’s 13th SEC title. It was the first since 2005 and earned the Bulldogs a spot in the College Football Playoffs.

The selection committee ranked the Bulldogs third. They will face the Oklahoma Sooners in the Rose Bowl on new years day. In the second semifinal match-up, No.1 Clemson will take on Alabama in the Sugar Bowl. According to ESPN stats, it is just the second time since 1920 that no Big Ten or Pac-12-team is participating in the Rose Bowl. It is the first time that two SEC teams make it to College Football Playoffs.

Georgia comes back against Auburn

In the SEC championship game against Auburn, Georgia did not start off well. In the first 15 minutes they were not winning in any part of the game and trailed 7-0 after the first quarter. But a huge fumble from Auburn in the second quarter shifted the momentum for the Bulldogs. From that point on, Georgia was in control of the game and clinched the SEC-title with a 28-7 win over the Tigers.

After the game, Georgia coach Kirby Smart had some warm words for his seniors:

“The seniors mean everything to this program,” Smart said. “The leadership that he (Nick Chubb) and Sony Michel and the rest of these seniors have provided for us is impeccable. I mean this is an awesome win for our program, our university and a lot of people in the state of Georgia.”

Can’t think of a more deserving person or player for the Butkus Award than @RoquanSmith1 !!!#JustGettingStarted pic.twitter.com/TbfVQ8SIIi

Georgia junior linebacker Roquan Smith was honored with the 2017 Butkus Award, given to the nation’s best linebacker. He is the first Bulldog ever to achieve this honor. Smith had a huge game against Auburn when he totaled 13 tackles, a sack and two fumble recoveries. He also was MVP of the game. In the season he had a total 113 tackles and 5.5 sacks.