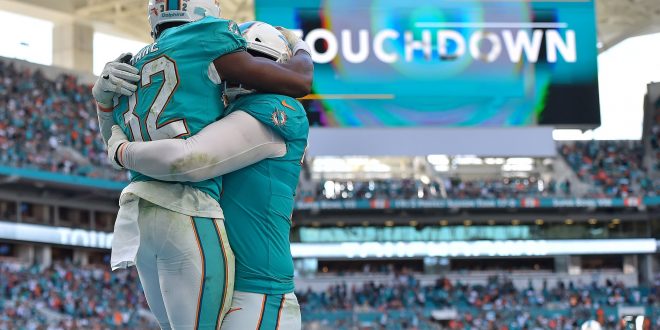 The Miami Dolphins took their fifth win of the season this Sunday against the Denver Broncos. The Dolphins were able to snap their five game losing streak with their 35-9 win. After facing the Dolphin’s dominating defense this Sunday, the Broncos suffered their ninth loss of the season.

Dolphins got the ball first and drove it to midfield before stalling out. After the Dolphins scored a safety from a botched snap and a Broncos field goal. The Dolphins had a good nine-play 75 yards TD scoring drive. After their strong start the Dolphins kept it up from there.

Xavien Howard and Kenyan Drake had strong performances that led the Dolphins to their win.

Howard took two of Miami’s three interceptions and took a 30-yard interception return for a touchdown.

On the offensive side of the ball Drake stomped all over Denver’s defense. In just his third start of his career, he forced seven missed tackles on just 23 carries. The 2016 third-round draft choice from Alabama had his biggest run come in the third, when he cut away from a tackle attempt by Broncos safety Will Parks and broke another tackle before getting into the end zone after completing a 42-yard run.

BRONCOS’ HAVE ANOTHER LOSS ON THE ROAD

The Broncos had a tough game against the Dolphins, they turned the ball over, went 0 of 6 on third downs and were inept in the red zone. The Miami team was able to close off the first half with their second halftime lead of the season, 16-3.

Trevor Siemian had his second opportunity to start for the Broncos this season, Siemian threw three interceptions, including his second pick-six of the season. He completed just 19-of-41 passes for 200 yards and was sacked three times. He posted a 30.5 quarterback rating. Sieman was placed as the staring quarterback after Paxton Lynch’s ankle injury, making him the third starting quarterback for the Broncos.

“It’s just a tough day. A couple of throws I’d like to have back,” Siemian said. “We didn’t get off to a good start. From there on, no rhythm.”

Coach Joseph said it has been hard to find a guy to operate efficiently for them to win a game.

Denver averaged 3.8 yards per pass play. Head coach Vance Joseph said he will see who he will be starting this coming Sunday against the New York Jets.

The Dolphins are back at the Hard Rock to host the Patriots, a team they already lost to 35-17.