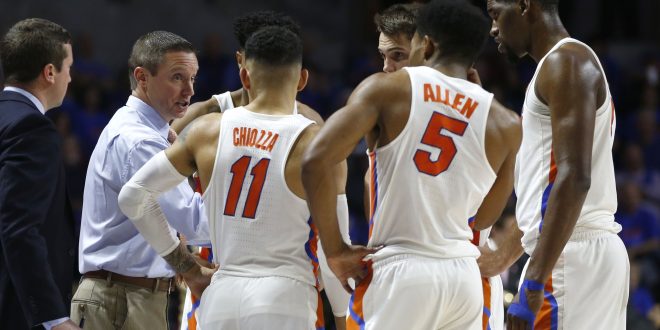 No. 5 Florida Commits Season-High 17 Turnovers in 83-66 Loss to Florida State

Florida’s 83-64 loss to Florida State on Monday night was record-breaking. The Gators have now lost four straight games to the Seminoles for the first time in an almost 70-year old rivalry. Florida shot an abysmal 24% from three-point range and sunk only 36% of their attempts from the field. In the second half, the Gators went 2-9 from beyond the arc

Jalen Hudson (16), KeVaughn Allen (15) and Egor Koulechov (11) combined for 42 of the Gators’ 64 points. Florida was outrebounded, 51-34, and allowed 23 offensive rebounds. The Seminoles recorded 24 second-chance points and outscored the Gators in the paint, 36-20.

Florida State led for 36 minutes and 33 seconds on Monday night, despite shooting 39% from the field and 30% from long-range. Florida’s 2 fast-break points were their fewest of the season. The Gators return to the hardwood on Wednesday night when they take on Loyola-Chicago at 8 p.m. at the O’Connell Center.

Florida State sends a message with a convincing win over Florida in Gainesville. Noles are a bonafide sleeper in the ACC. Deep, quick, and versatile.

Mike White on Deaundrae Ballard’s effort vs. the rest of the team’s.

Mike White on his team’s toughness compared to last season.

Mike White describes his team’s performance as “the epitome of soft.”

An early 7-0 run gave the Seminoles a 10-1 lead with 17:19 remaining in the first half. Florida State knocked down two of their first three shots from beyond the arc, while the Gators started off 1-3 from the field. UF turned the ball over three times in the first three minutes.

FSU continued to set the pace midway through the first half. The Seminoles led 14-7 with 12:53 left in the first frame, despite shooting 5-16 to start the game. The Gators opened the contest an even worse 3-11 from the field.

A Kevarrius Hayes putback lay-up gave the Gators their first lead of the game with 10:08 left in the first twenty minutes. The shot completed an 8-0, 2:43 run for Florida. During the stretch, Florida State missed 14 of 15 shot attempts.

The Gators committed their 10th turnover of the game with 7:42 remaining in the first half. Another 7-0 run gave Florida State a 24-18 lead as Terance Mann opened the game 4-5 from the field, good for 9 points.

Florida took their first lead in almost six minutes on a Jalen Hudson lay-up with 2:48 remaining in the first half. The Gators led 35-34 at that point in the game.

Florida State ended the first frame on an 8-0 run, taking a 42-35 lead into halftime. Terance Mann led all scorers with 11 points, while Egor Koulechov led the Gators with 9 points on 3-7 shooting.

The Seminoles outrebounded the Gators, 28-21, in the first twenty minutes and grabbed 14 offensive rebounds. FSU scored 17 second-chance points in the first half. Florida committed 11 turnovers in the first frame, leading to 11 points for Florida State.

Florida State committed two turnovers in the first three minutes of the second half. Still, the Seminoles led 50-44 at the under-16 media timeout.

Almost four minutes of scoreless basketball for the Gators extended the Seminoles’ lead to 11 with just under 14 minutes remaining in the second half. Terance Mann and CJ Walker scored 29 of Florida State’s first 56 points.

Florida’s second half struggles continued as they missed their first six three-pointers of the second half. Florida State led 59-46, their largest lead of the game up to that point, with 10:48 left in the contest.

The Gators have one day off before taking on Loyola-Chicago on Wednesday night at 8 p.m. at the O’Connell Center.

"Deaundrae Ballard gave us a little bit of positivity there. The rest of our team from a competitive standpoint was very subpar." -Mike White