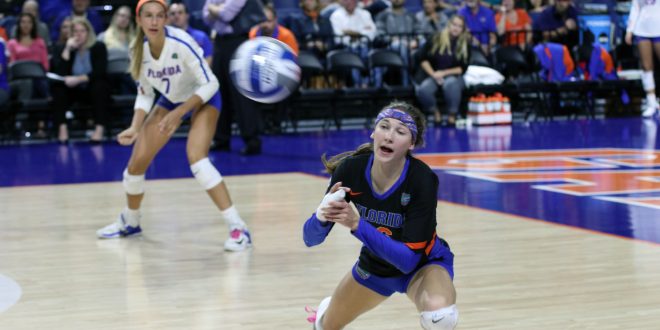 The Florida Gator volleyball team made history all season long. Unfortunately, it could not finish in that fashion as they fell short of their first national championship, losing to Nebraska three sets to one.

It was a rough night offensively as the Huskers gave the Gators all they could handle.

It was a back and forth affair early but then Nebraska went on a 7-0 run which set the tone for the rest of the first set. Florida was held to a .025 hitting percentage thanks to a tough Nebraska defensive effort. UF made it close in the end but lost the set 25 to 22.

The second set wasn’t much better for the Orange and Blue as the Huskers kept rolling. Florida was once again held to a low .108 hitting percentage while Nebraska flourished with a .417 percentage.  The Huskers were flat out dominant as they won the second set 25 to 17.

A team that has players like Carli Snyder, Rhamat Alhassan, and Shainah Joseph will never give up.

That was the case on Saturday night as the Gators threw their best punch in the third set. Florida more than doubled their hitting percentage with a .308 mark and it seemed the Gators finally found their rhythm, winning the third set 25 to 18.

UF could not hold Nebraska off any longer as the Huskers came out firing on all cylinders in the final set. All the momentum the Gators worked hard to create in the previous set went by the wayside as Nebraska got out to a 10 to 2 lead.

Florida desperately tried to find some magic like they did a week ago against USC but weren’t as fortunate this time around. Nebraska held on, winning the final set of the season 25 to 16.

Nebraska Junior Mikaela Foecke was the best player the Gators saw the entire tournament as she scored 22.5 points and had 14 digs. Whenever it seemed that Florida was getting ready to make a run, Foecke would make sure that was not the case.

One thing the Gators can take away from this match is the fact that their seniors gave everything they had in their final collegiate game.

Snyder, Joseph, and Alhassan all led Florida with double-digit points. Snyder led the trio with 13.5 points. Alhassan led UF with a team-high 3.5 blocks and Joseph scored 11 points as she kept trying to keep her team positive throughout the entire match.

Historic Season Comes to An End

Those in attendance at the Sprint Center in Kansas City witnessed a clash between two storied programs.

Florida coach Mary Wise fell short of becoming the first female coach to win a Division I Volleyball National Championship and the loss puts the Gators at 0-2 all-time in the national championship match.

Despite the loss, the Gator volleyball team and its seniors have plenty to be proud of for what they accomplished this season.

Still plenty to be proud of this season. Thank you, #GatorNation, and we'll see you in 2018! ✊✊ pic.twitter.com/OKXJsWdpsX