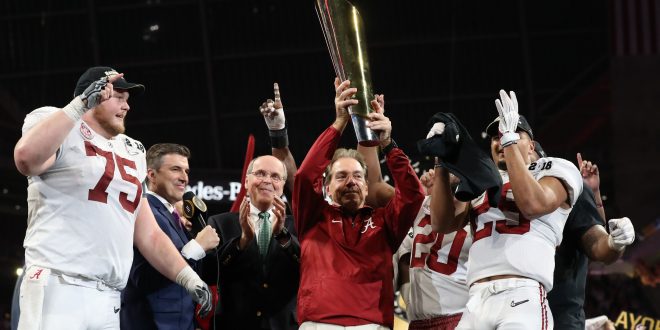 Way Too Early Prediction for Alabama 2018

As you all may know, the Alabama Crimson Tide just finished a remarkable college football season as national champions after defeating the Georgia Bulldogs this past Monday. Head Coach Nick Saban just attained his fifth national title with Alabama in the past nine years. Saban has tied Alabama coaching legend Paul “Bear” Bryant with most national titles in college football history.

This Alabama team is the second team in history to finish atop the AP Poll Rankings after being ranked number one in preseason poll since USC Trojans did back in 2004, according to ESPN.

But enough of this season already!

Alabama has proved that they belong in the playoffs time and time again. These are the reasons as to why they’ll make the postseason again in 2018 and possibly win the national title once more.

Saban benched Jalen Hurts in the first half after a horrendous start. During halftime, Saban replaced Hurts with freshman Tuanigamanuolepola Tagovailoa for the remainder of the game. Tua, a Hawaiian native, was about to enter his first game in the biggest stage of college football.

He later finished the game with 14/24 completions for 166 yards, 3 touchdowns and a game winning drive in overtime to beat the Bulldogs for the National Title.

Tua will be back next year competing with now Junior Jalen Hurts for the quarterback position for the regular season.

Najee Harris, freshman running back was another threat that had a huge break out game this past Monday. Starting running

back Bo Scarbrough was having a tough time getting some yards against Georgia. Which allowed Harris to get some playing time and he did not disappoint.

Harris only had six touches and ended with 64 yards, averaging 10.4 yards per carry in his Alabama debut.

Junior running back Damien Harris will be returning to Tuscaloosa for his senior year. Harris notched his second straight 1,000 yard season this year and also finished with 11 touchdowns. Bo Scarbrough declared for the 2018 NFL draft following the title game. Alabama will maintain their strong backfield with Harris staying for one more year.

Harris averaged 7.4 yards per carry and 71.4 yards per game despite only getting handed 9.6 carries per game.

These are just some solid returnees for the Crimson Tide.

Bama fans should be confident with these three returning for next season.

Recent grad from the University of Florida. Editing all articles on here while helping out the newbies. Love all things basketball.
@@MarcoJMartinez_
Previous Can Georgia Get Back to The College Football Playoffs?
Next Egor Koulechov Excels In Florida’s 71-54 Win vs. Mississippi State