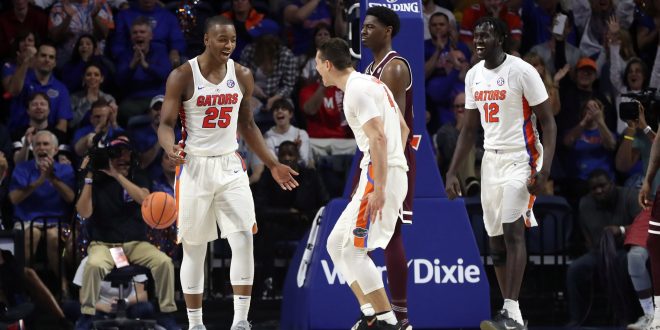 When Keith Stone got off to a slow start at the beginning of the 2017-18 season, critics and Gator fans began to get frustrated with his lack of development. Stone was supposed to make a sizable jump to help cope with the key losses of Devin Robinson, Kasey Hill, Canyon Barry and Justin Leon.

On Saturday afternoon, Keith Stone had his best game in a Gator uniform. Even though the Gators lost to Ole Miss, Stone put up a career-high 23 points and 8 rebounds. He also took a career-high 18 free throws, ultimately connecting on 13 of them. This was the most free throws attempted by a Gator since Joakim Noah shot 22 against Georgia on March 1, 2006.

Stone’s recent resurgence can be attributed to his increased confidence. The redshirt sophomore was inserted into the starting lineup at the beginning of the conference schedule. In a press conference before the Ole Miss game, Stone discussed why he struggled to begin the season.

Keith Stone said he had a meeting recently with the coaching staff that got him out of a "dark place." Said he had no confidence, was worried about what the fans and the media were saying. He now has 41 points and 19 rebounds in the past 3 games and is playing his best ball at UF

He then went on to explain why his play has significantly improved since the beginning of the conference slate.

“He [Mike White] told me simple things to do. Box out, just do the little things. It don’t matter how many points you score, what you do. Just go out there, have fun and play.”

Stone has continued to do the little things for the Gators. He has drawn a team-high eight charges on the season. The Deerfield Beach product is extremely satisfied about the contributions he has brought to the team as of late.

“It’s pretty great knowing that I can help the team contribute in many ways. Getting rebounds or playing solid defense on the best post player, anything that’ll help the team win.”

Stone’s increased confidence can be seen both on and off the court. Typically a man of few words, Stone was eager to talk to reporters following his 10-point, 8-rebound performance against Mississippi State. With his confidence sky-high, it seems like the Gators finally have a reliable asset in their frontcourt.