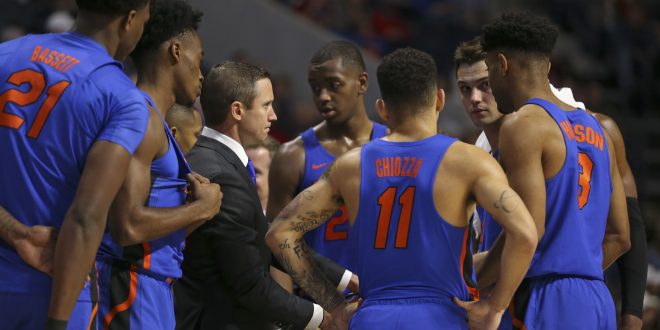 Florida Looks To Get Back On Track Against Arkansas

Florida is looking to get back on track after their six-game win streak was snapped by the Ole Miss Rebels on Saturday afternoon. The Gators are set to take on the Arkansas Razorbacks on Wednesday night at 7 p.m. on ESPN2 at the O’Connell Center. The Razorbacks won their SEC opener vs. the Tennessee Volunteers before dropping their next three games to Mississippi State, Auburn and LSU. Arkansas was victorious in their most recent tilt vs. Missouri on Saturday.

The Razorbacks are averaging 85.1 points per game and have scored at least 90 points in 9 games this season. During SEC play, 60.1% of Arkansas’ points have come from two-point range, the most of any team. They’re ranked 31st in the nation in offensive efficiency (KenPom) and out of 351 D1 teams have the 19th fastest offensive time of possession. The team from Fayetteville is looking to rebrand themselves as the “Fastest 40 in Basketball”.

The lineup of Chris Chiozza, KeVaughn Allen, Egor Koulechov, Keith Stone and Kevarrius Hayes has been used 23.1% of the time in the last 5 games. (per KenPom). #Gators

While Stone and Koulechov have provided key offensive sparks, KeVaughn Allen has been in a bit of a scoring drought. Allen has only scored 17 points on 29.2% shooting from the field in the Gators’ last four games. Despite the slow start, Allen has become a better passer and ball-handler this season than in years past. Allen is averaging 2.4 dimes per contest this year, better than his average of 1.5 last season, has the 64th lowest turnover rate in the nation and is shooting 89.8% from the free throw line.

John Egbunu (knee), Isaiah Stokes (knee) and Chase Johnson have all been cleared for non-contact practice. Gorjok Gak has been listed as doubtful for Wednesday’s game vs. Arkansas, while Deaundrae Ballard (illness) is expected to play.

Mike White said Egbunu looks "enormous" but needs to get back in game shape. Said it looks like they just signed two defensive lineman in Stokes and Egbunu.

Wednesday’s game tips-off at 7 p.m. and can be seen on ESPN2 with Beth Mowins and Jon Sundvold on the call. You can listen to the game on the Gator IMG Sports Network or Sirius 137/XM 190 with Mick Hubert and Mark Wise on the broadcast.