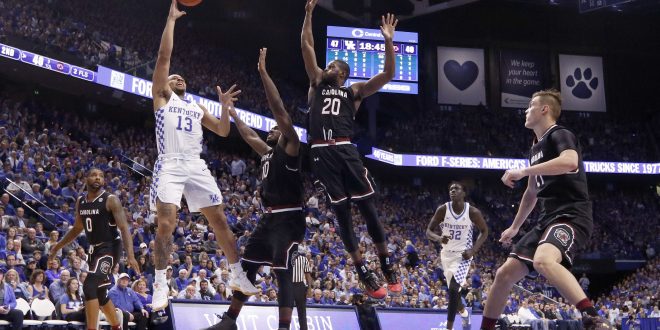 No.18 Kentucky (14-3, 4-1 SEC) and the South Carolina Gamecocks ( 11-6, 2-3 ) will be facing off tonight. This is one heated rivalry between the two. In the last three visits to the Colonial Life Arena, head coach Calipari has been ejected twice.

The big blue Wildcats are off to yet another good season, being lead by one of the youngest rosters in college basketball today. Calipari’s team is a very young team that has a lot of growing up to do, but that’s not stopping them from pursuing another title. The majority of Kentucky’s starting five is led by freshman.

Kevin Knox who is one of the rising stars for the Wildcats and leads the team in scoring at 14.2. Alongside him is the returning Redshirt freshman Hamidou Diallo who is averging 13.8 points a game. Diallo took a leap of faith last year and decided to enter the NBA draft, but withdrew himself because he felt like wasn’t quite ready.  This year, he came back to help lead his team to a championship.

On the other hand, the unranked Gamecocks are lead by head coach Frank Martin. They are one team in the SEC that does not back down from a battle. They are for sure a team that is not to be slept on, being that they snuck their way into the Final Four last year. This team has proven themselves worthy. This year the team is led by replacement Frank Booker, a guard who is a Grad-student transfer from FAU averaging 10.9 ppg. Following by his side is Jr. Chris Silva who is averaging 14.2 ppg.

Tune in tonight on ESPN at 9 p.m. to see these two teams hash it out, and hopefully John Calipari is able to keeps his cool.

Previous SEC Basketball Preview: Texas A&M Hosts Ole Miss
Next Florida Looks To Get Back On Track Against Arkansas