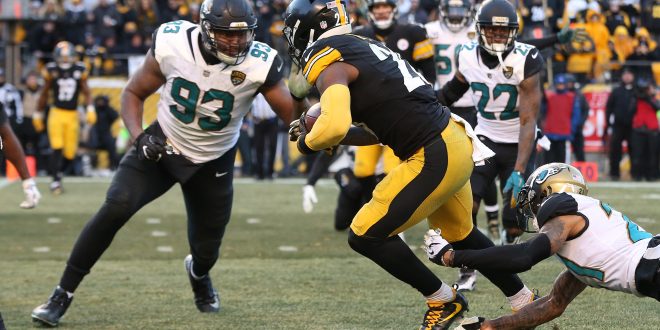 When the Jaguars arrived back in Jacksonville Sunday night after their AFC Divisional Round playoff win over the Pittsburgh Steelers, cornerback Jalen Ramsey hyped their home crowd yelling “We’re going to the SuperBowl!” This prediction seems to have the team confident that their ticket is punched into the February 4th game despite having to face the New England Patriots this Sunday for the AFC Championship game.

But Patriots defensive tackle Adam Butler wants it proved out on the field saying, “If you’re going to make a statement like that, you better be able to back it up.”

Let the numbers do the talking

The Jaguars rely on defense and running the ball, which can help them stay within a spread that’s approaching double-digits.

The Jags were top in the league in rushing yards at 141.4 per game, seven more than the closest team and in the postseason. Their 159.5 rushing average is over 25 more than any other team. Defensively, with 16.8 points per game, they score second in scoring defense.

Jacksonville has also scored eight defensive touchdowns this season, making it the most in the NFL.

But Jaguars’ safety Tashuan Gipson missed Wednesday’s practice because of a right foot injury, a key player for the Jaguars’ defensive plan to stop the Patriots tight end Rob Gronkowski. If he can’t play, the Jags will have to rely on inexperienced Jarrod Wilson, who has been mainly a special teams player.

On Wednesday, the Pro Football Writers of America named the Jags wise soul Calais Campbell NFL defensive player of the year. Campbell led the team with 14.5 sacks this season, both him and the team.

He’s a big part of their defense, but that still won’t make stopping the Patriots an easy task.

Steelers quarterback Ben Roethlisberger suffered a few interceptions in Sunday’s loss to the Jags. His goal to be the top dog in the matchup backfired for Pittsburgh.

Even though people are calling it the Cinderella story, Campbell on the other hand said he expected them to be here. Regardless, this team has earned their spot in this upcoming match up.

Doug Marrone said the key is to create mismatch and one on one against their linebackers and apply pressure. The key here is to run the ball and focus on that pressure. Injury or no injury the Jags know Tom Brady is still a threat.

“He is the best quarterback to ever play the game. The reason why he is because he prepares. He knows everything you want to do. He can literally call it out as soon as you call a play and line up; he knows exactly where you want to go because he knows what you are in,” said Campbell.

The teams will go face-to-face Sunday afternoon at 3:05 at Gillette Stadium. As expected, the Patriots are the favored team coming in to play their seventh straight AFC Championship game and the Jags are coming in as the nine-point underdog who haven’t made it this far since 1999.