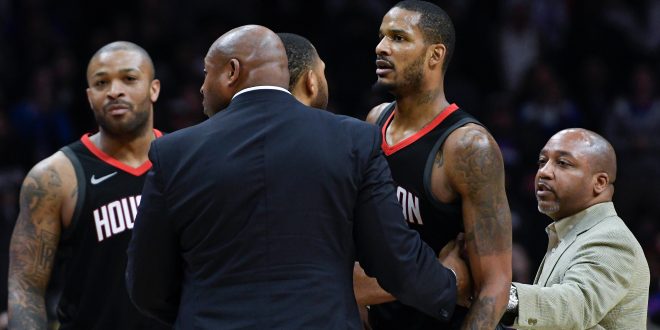 The Houston Rockets’ forward Trevor Ariza and guard Gerald Green are suspended for two games each in the aftermath of Monday night’s altercation. Although the NBA has settled its investigation, this has brought further controversy in regards to the lack of punishment for any Clippers players.

What led to Ariza’s and Green’s suspensions?

An NBA news release stated that Ariza and Green came into the Clippers’ locker room and initiated a “hostile, verbal altercation”  after LA’s 113-102 win. Houston’s James Harden and Chris Paul soon followed Ariza and Green into the locker room; however, the NBA decided that Harden and Paul were going in to calm the situation and gave them no punishment.

Some now question why the NBA did not assign suspensions to any Clippers players for their actions during the game.

The Rockets players claim they were provoked by LA forward Blake Griffin‘s intentional aggression towards Houston’s Head Coach Mike D’Antoni in the fourth quarter, sources say. Clippers guard Austin Rivers was also allegedly acting contentiously throughout the game as he sat on the bench. Rivers has been sitting out since he suffered an Achilles tendon injury in a game against the Lakers in the end of December. Still, Rockets players claim he was actively gloating Griffin’s successful performance that night with aggressive language.

Ultimately, suspensions came in response to the events that took place in the locker room after the game was over. In reference to his team’s involvement in the altercation, Clippers Head Coach Doc Rivers commented, “We were never concerned that any of our guys would be disciplined for anything. It’s legal to sit in your locker room.”

The Rockets play Minnesota tonight at 9:30 p.m. Ariza and Green won’t return to the court until Monday, January 22nd as the Rockets take on the Miami Heat. The Clippers will face the Utah Jazz at Vivint Smart Home Arena Saturday at 9 p.m.

I grew up in the Washington, DC area and now I'm a Gator. I'll always be learning more about myself, others and the world around me. And I'll always be talking about sports.
@kelsey_godman
Previous The underdog Jaguars look to knockoff the Patriots in the AFC Championship
Next Florida Softball Selected First in the SEC