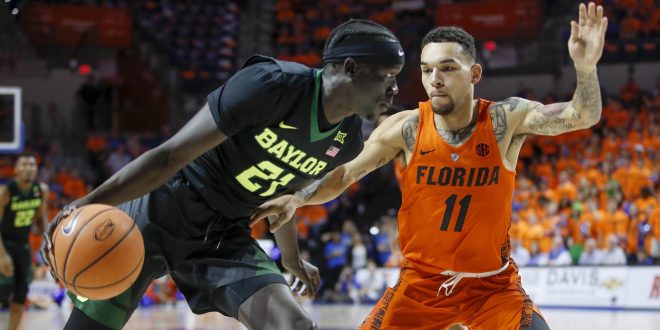 No. 20 Florida’s three-point shooting was too much for the Baylor Bears in Saturday’s 81-60 win in the SEC-Big 12 Challenge. The Gators went 14-25 (56%) from beyond the arc en route to a 21-point victory at Exactech Arena. Chris Chiozza led Florida with a team-high 20 points, while Jalen Hudson added 17, 14 of which came in the second half. Egor Koulechov came close to a double-double, finishing the game with 16 points and 8 rebounds.

The Gators limited the Bears to 40% shooting from the field and 20% shooting from beyond the arc. Florida never trailed in Saturday afternoon’s contest, leading the game for 39 minutes and 40 seconds. UF will have two days off before taking on the Georgia Bulldogs in Athens on Tuesday night in the first meeting of the two rivals this season.

Scott Drew called Chris Chiozza one of the best PGs in the country. Said when he's scoring on top of his facilitating he goes to another level. Added team could either take away his passing or scoring, and they chose passing. Didn't work out in Baylor's favor.

"Chris Chiozza was amazing today, I can't imagine he's had a better game than that off the top of my head." -Mike White

"We didn't put 40 together, but it's probably the best defensive performance we've put together." -Mike White

Previous O’Sullivan: “We’re Not Defending A National Championship” With Gator Baseball
Next Gator Women’s Basketball Renews Rivalry with No. 21 Georgia