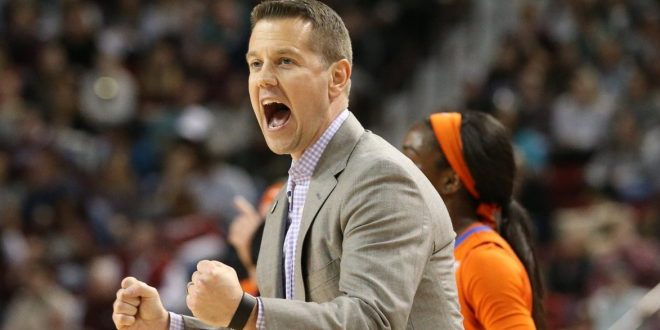 The Florida Gator women’s basketball team has a tough road ahead. Following a 90-53 beat down at the hands of number two Mississippi State Thursday, the Gators return home to face their second of six straight ranked conference foes. The 21st ranked Georgia Bulldogs come into Gainesville for the first of two meetings between the rivals this season. The Gators are approaching this rivalry showdown with the Bulldogs with the sense that anything can happen.

When a team loses by 47 points, it’s hard to take away any positives from that performance. Gator head coach Cam Newbauer and his players saw some areas that were positive following a loss to the second best team in the country. Florida had Mississippi State reeling in the first half. The Gators were down by as little as two and were on a run aided by a four minute Bulldog scoring drought. Florida senior forward Haley Lorenzen described how Florida was competitive with Mississippi State in the first half.

A negative takeaway was that the Gators turned the ball over 23 times. Mississippi State was able to get easy points in transition. Florida faced a pressure that they haven’t seen all season. Lorenzen said that the team needs to move around without the ball to combat the pressure.

One area that has improved tremendously is Florida’s effort on the glass. For the fifth straight game, the Gators outrebounded their opponent. Against Mississippi State, one of the best rebounding teams in the country, Florida had a +5 edge in rebounds. They even limited Mississippi State to just 11 rebounds. Even though this stat is aided by Mississippi State not missing many shots, its still a focus for the Gators to limit as many second chance points as possible. Newbauer said that the rebounding has improved due to the team’s focus in that area.

Look At the Opponent

Playing a big-time rival like Georgia just days after playing one of the best teams in the country wouldn’t be ideal for most teams. For the Gators, they are ready for the challenge. Newbauer said that playing Georgia after Mississippi State is beneficial for his team and what challenges Georgia brings to Sunday’s showdown.

Georgia comes into Gainesville riding a six game winning streak that includes wins over Texas A&M and most recently Missouri. They are led by two efficient shooters. Georgia senior forward Mackenzie Engram leads the team with an average of 13.3 points per game. For the season, Engram is shooting close to 45% from three and 47% from the field. Georgia junior forward Caliya Robinson is shooting 50% from the field and leads the team with 7.9 rebounds per game. The Bulldogs are efficient on the offensive end and it will be Florida’s mission to put them in uncomfortable shot opportunities.

The Florida-Georgia rivalry is one of the most sacred rivalries at the University of Florida. Its the second longest series in women’s basketball history, only behind Florida State. Sunday will be the 71st meeting between the two schools. It will be the first meeting for Newbauer as head coach of the Gators. He had experience in this rivalry as a Georgia assistant coach. Newbauer spent two years as an assistant for the men’s team. Then he joined the women’s team for three seasons starting in 2008. Newbauer said he’s approaching his first meeting with his former team as just another game.

While Newbauer gets his first taste of the rivalry from the Florida sideline, Lorenzen will face the rival Bulldogs for the last time at home on Sunday. She shared what her message is to the young players who are facing Georgia for the first time.

The Gators and No. 21 Bulldogs will write the latest chapter of the Florida-Georgia rivalry Sunday. Tip-off from Exactech Arena is set for 2 p.m.