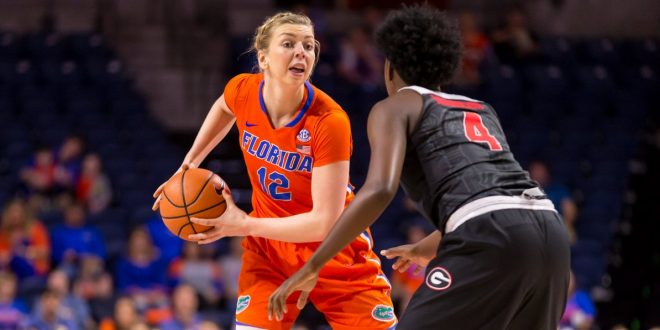 Heading into the fourth quarter, the Florida women’s basketball team seemed on its way to capturing its first win against a ranked opponent this season. The Gators led 42-35 at the beginning of the fourth quarter. The game’s final quarter ultimately belonged to the 21st ranked Georgia Bulldogs as they outscored Florida 31-15 in the final 10 minutes of play to steal the win from their hated rivals with a final score of 66-57. As they have numerous occasions throughout the season, Florida failed to hang on in the end.

Florida was placed in a spot they weren’t accustomed to against the level of competition they were up against. The Gators led throughout the game. Florida’s largest lead of the game was 10 early in the third quarter. When the game reached its final quarter, Georgia finished the game strong. They started the quarter on an 8-0 run. Both teams would go back and forth through most of the quarter. Georiga would gain the edge they needed at the foul line and from the three-point line. Gator coach Cam Newbauer placed blame on himself and his staff for leaving key starters out longer than they should’ve been. He also said that playing with the lead didn’t affect his team. Even though Georiga’s late push put a damper on the Gators, Florida junior guard Funda Nakkasoglu said the team played with its best effort.

Nothing From The Cheap Seats

One of Florida’s strengths this season has been the three-point offense. Occasionally, the Gators have games where the shots don’t seem to fall. Sunday afternoon was one of those games. Florida had their worst three-point shooting performance of the season. The Gators finished the game shooting 2-15 from beyond the arc. The two made three-pointers came in the first half. Florida head coach Cam Newbauer said the Georgia frontcourt defense gave Florida’s shooters problems.

Georgia’s tight perimeter defense forced Florida to attack the Bulldogs from inside. The Gators finished with 28 points in the paint. Even though the Gators led in the rebounding department once again, they failed to take nine offensive rebounds and turn them into second-chance points. Where Florida struggled in this department, Georgia excelled, totaling 13 second-chance points.

Florida’s offense ran through two of its starters for most of the game. Nakkasoglu and Florida senior forward Paulina Hersler were the leading scorers Sunday afternoon. At the half, the two starters had 22 of Florida’s 26 points. Nakkasoglu ended the half with a three-pointer and the third quarter with a buzzer-beating layup. She finished the game with 18 points. Hersler tied a career high with a team-leading 19 points with most of those coming in the paint. She said she approached the game one a shot a time.

Florida senior forward Haley Lorenzen left the game momentarily with what appeared to be a cramp. She was tended to on the sideline and returned to the game. Newbauer addressed the injury following the game and said that she is fine.

The Gators have some time off before their next tough match up on this six-game stretch. Florida will have the week off to fix some mistakes and have time to rest. They’ll return to the court February 5 in Columbia, Missouri where they’ll face the number 11 Missouri Tigers.