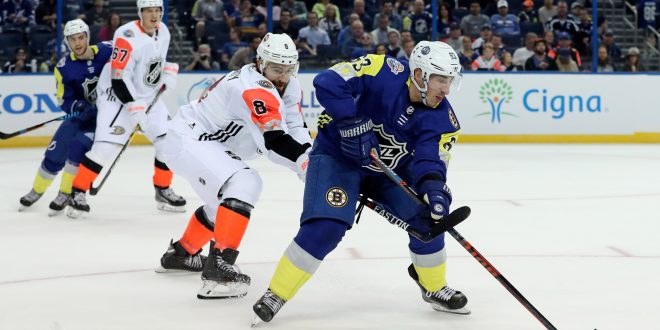 The 2018 All-Star Game was hosted by the Tampa Bay Lightning this past weekend in the Amalie Arena. This was the first time NHL All-Star weekend was held in Tampa, since 1999.

On Sunday the Pacific Division defeated the Atlantic Division with a 5-2 overall victory in the four-team division tournament that played in a three-on-three format. The team captured the prize of $1 million shared by the winners of the tournament.  The goals for the Pacific were made by rookie Brock Boeser, Johnny Gaudreau, Drew Doughty, and two were made by Rickard Rakell. Only four goals were allowed in the two games the Pacific played in by goalies Marc-Andre Fleury and Mike Smith.

A little filth from @RickyRakell93 and the Pacific Division take the 2018 @Honda #NHLAllStar Game. pic.twitter.com/nNTXYIoof8

Boeser who played for the Vancouver Canuck’s was the only rookie and was named MVP of the game.

The Detroit Red Wings, Mike Green had 2 goals for the Atlantic team, off of Fleury and Smith in the final game.

The were numerous activities that included a concert, fan fest, and a skills competition, which the Penguin’s Sidney Crosby took part in the accuracy shooting challenge. Crosby won it last year but they changed it up by having lit targets and the players had to hit the lit targets instead of just hitting regular targets.”Selfishly I liked the way it was set up last year with the accuracy because I won but I think it’s fun to mix it up too” Crosby said.

Jon Cooper of the Tampa Bay Lightning was the coach of the Atlantic division. In addition, there was a warm welcome from Lightning fans during the Atlantic-Metropolitan semifinal when goalie Andrei Vasilevskiy,  forwards Brayden Point, Steven Stamkos, and Nikita Kucherov, all Lightning players, hit the ice at the same time.

Kucherov also added a first, with a hat-trick in the semifinal for a 7-4 victory. This hasn’t happened in an All-Star game since the NHL added the new format with the three-match, three-on-three format in 2016.

Brayden Point, Auston Matthews for Toronto, and Buffalo’s Jack Eichel all scored for the Atlantic. They came back from a 3-1 deficit after early goals were made by Pittsburgh’s Sidney Crosby, Philadelphia’s Claude Giroux, and Washington’s Alex Ovechkin.

At the All-Star Game this weekend, NHL Commissioner Gary Bettman announced the San Jose Sharks will host the next All-Star weekend in 2019. It will be in the fairly new SAP Center which is only four years old.

Previous Gator Women’s Basketball Fourth Quarter Struggles Lead To Heartbreaking 66-57 Loss to No. 21 Georgia
Next Rousey To Join the WWE