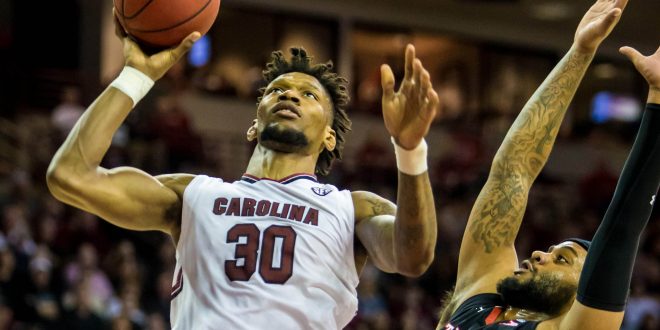 The South Carolina Gamecocks travel to the Reed Arena this Saturday, to challenge the Texas A&M Aggies in a weekend full of SEC basketball action.

The South Carolina Gamecocks enter this weekend’s game coming off of back to back losses this week. After loosing at home on Wednesday night, the Gamecocks hope to win on the road. If they are unable to avoid a loss, they will have their first three-game loosing streak since last season.

The projected starters for this weekend include guards, Wes Myers, Evan Hinson, Frank Booker; and forwards, Chris Silva and Malik Kotsar.  Chris Silva leads the team in total points and offensive rebounds. South Carolina needs Silva to show out against Texas A&M’s Robert Williams (the second in the league with blocks per game).

Coach Frank Martin is currently 8-5 against the Aggies in his coaching career.

The Aggies are at home again after beating Arkansas on Tuesday. Currently second in the SEC in field goal percentage and first in rebounding margin, Texas A&M has a fierce defense. Using their undeniable height advantage, the Aggies still are one of the best rebounding teams in the nation.

Coach Billy Kennedy is in his seventh season as Texas A&M head coach and hopes to lead his team in a home win against the Gamecocks. He is currently 3-3 against South Carolina.

According to ESPN’ Basketball Power Index, Texas A&M is favored to win.

Texas A&M hopes to maintain their winning streak while South Carolina hopes to begin their own win streak this weekend.