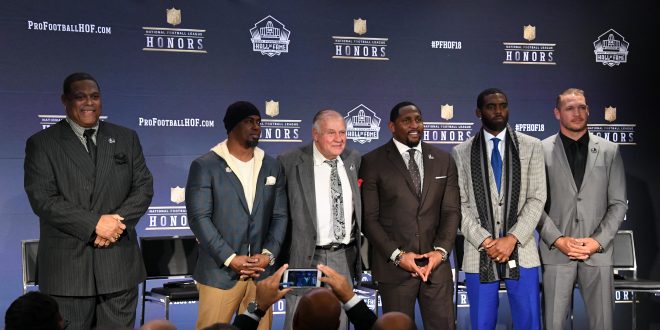 Legendary safety Brian Dawkins joins seven other former National Football League players in the Pro Football Hall of Fame’s Class of 2018. The former Philadelphia Eagles and Denver Broncos player is the only defensive back in the class and is one of four defensive players in this class. Dawkins enters in Minneapolis, Minnesota, the same site where his Eagles won their first Super Bowl February 4, 2018. Furthermore, the safety joins Terrell Owens as one of two players that were on the 2004 Eagles Super Bowl team.

Exclusive: @BrianDawkins reacts to being named one of the newest members of the @ProFootballHOF.#FlyEaglesFly pic.twitter.com/uwzFDxU5OC

Dawkins played 224 NFL games from 1996-2011 (18 playoff games) and had 37 interceptions. Making nine Pro Bowl appearances, he also made the First-Team All-Pro team four times. The former Clemson Tiger accumulated 513 yards and two touchdowns across his 16-year career. On the other hand, ‘Weapon X’ also has featured on the 1996 NFL All-Rookie Team; he also earned three Player of the Week awards. He could not win a title during his playing career, however, he gets a ring as the executive of football operations for player development for the newly crowned Eagles. Philadelphia retired No. 20 in tribute to the great safety. All in all, Dawkins backed up his energetic personality with outstanding numbers.

Brian Dawkins, or B-Dawk, was known for leaving it all on the field when he played. Huge tackles and hype pregame or postgame speeches highlight the reel that he left fans watching over for years after his retirement. The big hits on Michael Vick, the kickoff dances, and more are all enshrined in the Pro Football Hall of Fame now.

Overall, he just wanted to be the best versus the best.