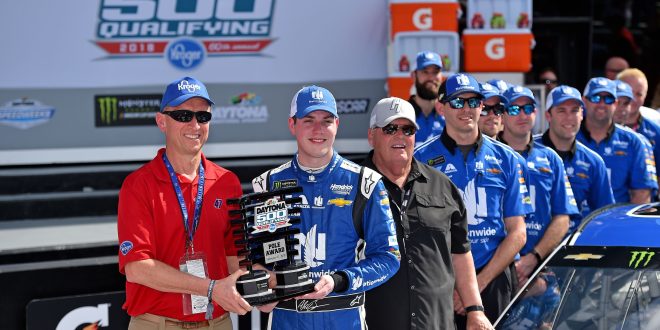 The Daytona 500 pole positioning concluded with a familiar number 88 car getting the win.

When Dale Earnhardt Jr. retired, Alex Bowman knew he had big shoes to fill. The 24-year-old driver was named Earnhardt Jr.’s replacement back in late June after Jr.’s concussion history caused him to hang it up. On Sunday, Bowman got off to a fast start in Earnhardt Jr.’s old No. 88 Chevy. Bowman earned himself a first-place start in the upcoming Daytona 500 with his win at the Daytona 500 Pole. In his first race as the full-time driver of the Hendricks Motorsports 88 car, Bowman finished a 2.5 mile lap around the Daytona Speedway in just 46.002 seconds. That is an average speed of 195.644 mph.

Saved the best for last.@AlexBowman88 is your 2018 #DAYTONA500 pole winner! pic.twitter.com/Bqq3RbKlLz

After the pole finish, Bowman spoke about the win.

Dale Earnhardt Jr. shared some of the joy with Bowman and the team on twitter.

Awesome! Great job @AlexBowman88 @TeamHendrick on the #Daytona500 pole! @Ives_Greg and the gang built a fast one.

Denny Hamlin, the 2016 Daytona 500 winner will start this year’s Daytona 500 in second after finishing the pole with a 46.132 second lap. Hamlin, in the No.11 Toyota Camry, had an average speed of 195.092 mph. This marks the first time in Hamlin’s career that he will start the race on the front row. Hamlin said on Twitter that his second-place positioning in the pole “feels like a win.”

Front Row!! Unbelievable effort by our @FedEx @ToyotaRacing @JoeGibbsRacing team. This feels like a win. pic.twitter.com/4zIVA5PXdR

Rounding Out the Top 10

With Bowman and Hamlin at 1 and 2 respectively, here is the top 10 from the Daytona 500 Pole

Looking Towards Next Sunday