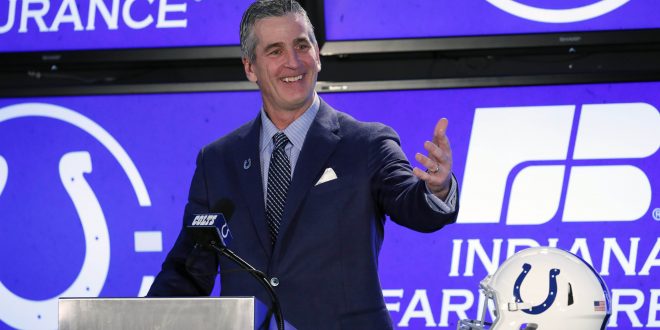 After a dismal season with a 4-12 overall record, the Indianapolis Colts might have some light at the end of the tunnel, in the form of new head coach Frank Reich. The former Eagles offensive coordinator was hired as the Colts’ new head coach on Sunday. Ten years ago, Reich operated as the offensive assistant and quarterbacks coach for the Colts. After some turmoil in the Colts’ 2011 season, Reich, along with the everyone else on the coaching staff, was removed after a 2-14 season. In his time since his original work with the Colts, he has helped with other programs in the NFL such as Arizona Cardinals; then, San Diego Chargers; Tennessee Titans; and most recently, the Philadelphia Eagles.

What happened to Josh McDaniels

For those of you unfamiliar with the Josh McDaniels situation, he withdrew from his agreement with the Colts to become the new head coach and chose to remain the offensive coordinator for the New England Patriots. The following statement was released by the Colts after his withdrawal: https://t.co/tnJw1c8lv4

When rumors of the situation started floating around, Twitter went absolutely crazy. Former players and fans expressed frustration with his withdrawal, perhaps reflecting the frustration of losing a head coach prospect, while others took a breath of relief.

A serious press conference turned to a more light-hearted tone when Pat McAfee, a former All-Pro Colts punter and representative of Barstool Heartland, grabbed a reporter’s microphone. McAfee asked Reich about his luck with always being surrounded by players with talent and his thoughts on McDaniels. Reich answered promptly, noting Andrew Luck’s unique and special abilities on the field and how the game is not built off of a single player. When answering the second question, he took a slight pause and said, “The ‘backup’ role has suited me well in my career.”

Frank was also very clear about his reaction to McDaniels stepping down. He said he didn’t contact his agent all and had faith that his work spoke for itself.

When the Colts announced Reich’s hire on Sunday, their official tweet announcement gained a lot of traction on Twitter with over 3,000 retweets and over 8,000 likes. Many fans responded to the tweet in disbelief, asking @Colts if the hire was for sure.

One of the biggest reactions to the announcement came from former Colts quarterback Payton Manning. The first-round NFL 1998 draft pick expressed his excitement for Reich with a statement of his own saying Reich “will be a good fit for the Colts organization.”

It didn’t take much for Reich to fire up the Colts fanbase after his press conference Tuesday afternoon. He talked about a “family gathering” feeling when he signed the contract at Colts owner Jim Irsay’s home. He recalled Irsay’s request for Reich to “help us bring the joy back to Indianapolis.”

Reich also discussed responsibility as a head coach and his faith in the management with the Colts’ program.

Mari Faiello is a second-year journalism student and sports writer for the Alligator. She covers the University of Florida's softball team and has previously covered UF men's tennis, UF women's tennis and UF volleyball. She has worked at the paper since Fall 2017. She has worked at ESPN 98.1 FM - 850 AM WRUF since Spring 2018. Her favorite sports are volleyball, college football and hockey (Tampa Bay Lightning).
@@faiello_mari
Previous 2018 SEC Swimming & Diving Championships Kick Off
Next Steve Kerr Facing Criticism For Letting His Players Coach