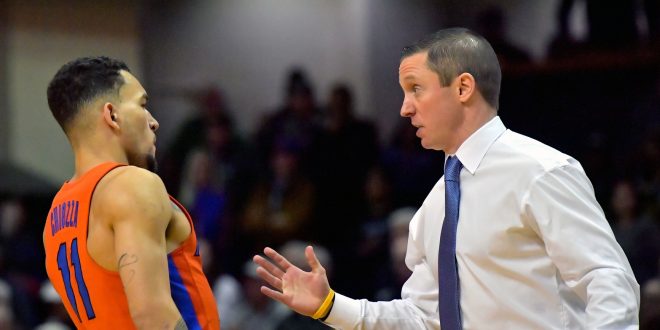 Florida Ready For Road Test vs. No. 19 Tennessee on Wednesday

Both squads have a lot on the line with March Madness approaching. In Joe Lunardi’s latest Bracketology, the Gators are listed as a No. 6 seed taking on No. 11 Kansas State in Dallas (Midwest). Lunardi has the Volunteers as a No. 4 seed squaring off with No. 13 Buffalo in Boise (Midwest). Wednesday night’s game tips-off at 9 p.m. on ESPN2.

Physicality has been an issue with the Florida Gators all season and a strength for the Tennessee Volunteers. Sophomore forward Grant Williams and junior forward Admiral Schofield have vamped up their roles this season and have the Vols in prime position for a shot at the SEC title.

Williams, a 6’5″, 234-pound power forward, has gone from role player to superstar in the course of one season. The SEC Player of the Year hopeful is averaging 15.7 points and 6.1 rebounds on 43.6% shooting from the field. Williams has notched six 20-point games this season and excels at getting to the charity stripe. The sophomore has taken 32 free throw attempts in Tennessee’s last four games and is ranked 90th in the NCAA in free throw rate.

Admiral Schofield, who stands at 6’5″, 238 pounds, is another matchup nightmare for the Gators. Schofield’s wide frame and pure strength help him outmuscle opposing defenders in the paint. The junior is averaging career-highs in points (12.2 PPG), rebounds (6.1 RPG) and three-point percentage (39.8%). Schofield has 10 games of 7 rebounds or more this season and has only 5 turnovers over the Vols’ last 5 games.

#Vols coach Rick Barnes: People forget that Grant Williams is still 19 years old. There are guys in prep school older than him.

Tennessee finished the SEC in 9th place last season and were projected in the SEC Pre-Season Media Poll to finish second-to-last in the league this year. The Volunteers deserve a sincere apology from the beat writers and columnists of the Southeastern Conference. The team from Knoxville has non-conference wins this season over Purdue, NC State and Wake Forest and are currently 9-5 in the conference. The Vols are ranked 41st nationally in offensive efficiency and 9th in defensive efficiency. UT also ranks 10th in the NCAA in assist-to-field goals made ratio. In league play, Tennessee ranks in the top 5 in free throw attempts-per-field goal attempts, three-point percentage, free-throw percentage and block percentage.

Some good plays from a bad night.

The Florida Gators have blown 5 double-digit, second half leads on the season. Two of them have come in the team’s last two contests vs. Georgia and Vanderbilt. Free throws struggles were a constant in each of those losses. Florida shot 59.3% at the free-throw line against Georgia and 63.6% on the road vs. Vanderbilt. Both are far below the Gators’ season average of 73.8%.

On top of free-throw issues, Chris Chiozza has not been playing his best basketball as of late. The senior floor general is averaging 6 points, 4.8 assists and 1.8 turnovers per contest over UF’s last five games. In four of those five games, Chiozza has had to play 35 minutes or more, increasing his late-season fatigue. Mike White stated in his press conference on Monday that “he’s got to play well for us to have a chance.”

The energy and effort issues surrounding the Gators have a lot to do with the team’s depth due to injuries. John Egbunu (knee) is still yet to play a game this season, while it looks more and more by the day that Isaiah Stokes (knee) and Chase Johnson (concussion) will take a redshirt for the year. Florida’s core six of Jalen Hudson, Egor Koulechov, Chris Chiozza, KeVaughn Allen, Keith Stone and Kevarrius Hayes are all averaging over 24 minutes per game. No other player is averaging more than 11.4 MPG (Deaundrae Ballard). According to White, the team hasn’t gone “more than eight minutes of fullcourt [practice] in the last two, three weeks” due to the sheer amount of injuries.

Mike White said due to fatigue the team hasn't run more than 8 minutes at a time of full-court drills. Said the workouts have been mainly halfcourt-based with individual improvement drills worked in.

Wednesday night’s game tips-off at 9 p.m. at Thompson-Boling Arena. You can watch the game on ESPN2 with Karl Ravech, Sean Farnham and Seth Greenberg on the call. You can also listen to the game on the Gator IMG Sports Network with Mick Hubert and Bill Koss.